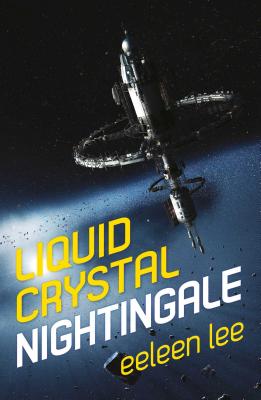 Pleo Tanza is a survivor. Her father was broken by tragedy, her twin sister is dead—chewed up and spat out by the corruption and injustice of Chatoyance—but she’s going to make it, whatever it takes. She’s going to get off this rock.

But escape is for the rich or lucky. Pleo’s framed for the murder of a rival student—the daughter of one of the colony’s wealthy, squabbling clans—and goes on the run, setting off a chain events that could destroy the fragile balance of the old colony forever…

"This novel zooms down a motorway at 150 miles per hour on the back of a motorbike... a strong debut from a writer I will be watching."
— Geek Syndicate

"Lee strongly invokes the tension between the different elements of the colony... Richly imagined and engrossing."
— SFX Magazine

“Liquid Crystal Nightingale is an ambitious and complex debut… with a deeply realised world and an utterly unique tone.” -- The British Fantasy Society
— Ian Green

EeLeen Lee was born in London, UK, but has roots in Malaysia. After graduating from Royal Holloway College, she worked for several years as a lecturer and a copywriter until she took the leap into writing. Her fiction since has appeared in various magazines and anthologies in the UK, Australia, Singapore and Malaysia, such as Asian Monsters from Fox Spirit Books, and Amok: An Anthology of Asia-Pacific Speculative Fiction. When she is not writing she can be found editing fiction and non-fiction, being an armchair gemmologist, and tweeting at odd hours.
Loading...
or
Not Currently Available for Direct Purchase