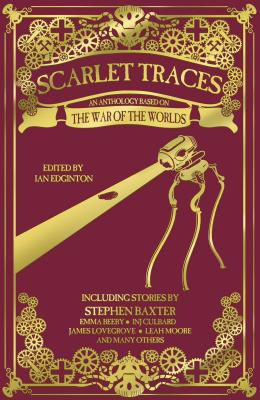 A thrilling, timely anthology of short fictions set after the events of HG Wells’ War of the Worlds in beautiful limited edition foil-and-cloth-bound hardcover!

It is the dawn of the twentieth century. Following the Martians’ failed invasion of Earth, the British Empire has seized their technology and unlocked its secrets for themselves, rolling out new machines and ever more deadly weapons in their quest for dominance.

“a showcase for D’Israeli’s art, every face a moment of peace or panic in a vividly identifiable style, traditional in its framing but radically expressive in the figurework. It’s a very productive friction, beefing up a robust science-fiction air for the Wells adaptation and emphasising the physical impact of Martian war machines, laying waste to pastoral Surrey and ingesting plenty of the population.”
— Tripwire (On Scarlet Traces comics)

“A series that increases its dramatic and imaginative scope with every step. It’s clever, accessible, scary, thought-provoking and thrilling, all wrapped up in a beautiful package”
— Grovel.org.uk

“A saga over a decade in the making”
— Comicon.com

“This is exceptional: scathing socio-political satire made sweet by being British speculative fiction through and through.”
— Page 45

Chris Roberson is the co-creator with artist Michael Allred of iZombie, the basis of the hit CW television series, and the writer of several New York Times best-selling Cinderella miniseries set in the world of Bill Willingham’s Fables. He is also the co-creator of Edison Rex with artist Dennis Culver, and the co-writer of Hellboy and the B.P.R.D, Witchfinder, Rise of the Black Flame, and other titles set in the world of Mike Mignola’s Hellboy. In addition to his numerous comics projects, Roberson has written more than a dozen novels and three dozen short stories.

Maura McHugh was born in the USA, but raised in Ireland, where she developed a love of mythology, horror fiction, art, and writing. She has lived in New York, Dublin, and Galway, and worked in IT before succumbing to her love of storytelling. She's the writer of the comic book series Jennifer Wilde and Róisín Dubh, and co-writer of Witchfinder: The Mysteries of Unland. She's the author of the fairy tale collection, Twisted Fairy Tales, and the collection of world myths, Twisted Myths. She's also a published poet, a produced playwright, and a screenwriter. She loves exploring the woods: the darker, the wilder, the better.
Loading...
or
Not Currently Available for Direct Purchase