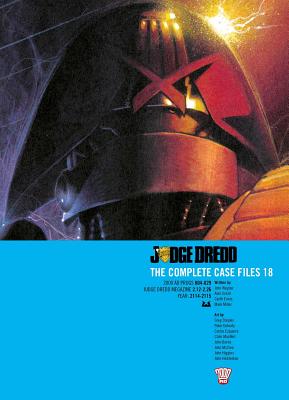 The latest in the smash-hit, best-selling graphic novel series! Almost half a million copies sold!

Mega-City One – a nightmarish enclosure located along the Eastern Seaboard of North America. Only the Judges – powerful law enforcers supporting the despotic Justice Department – can stop total anarchy running rife on the crime-ridden streets. Toughest of them all is Judge Dredd – he is the law and these are his stories...

Judge Dredd team up with the Emerald Isle’s finest, Judge Joyce in Mega-City One, while straight from the pages of the Judge Dredd Megazine there are robotic rumblings aplenty in Mechanismo & Mechanismo Returns!

One of the most influential names in the British comics industry, John Wagner started his professional career in the 1960s, working for DC Thompson in Dundee. Sub-editing various titles including Romeo, Wagner went freelance in the early seventies, forming a writing partnership with Pat Mills. Soon after, Wagner then made the move down south, joining IPC’s staff, where he initially edited girls’ titles, Sandie and Princess Tina, before helping to develop Battle Picture Weekly. Appointed as editor to the ailing boys’ comic Valiant, Wagner had an instant impact, co-creating and writing the hard-hitting cop strip One-Eyed Jack. He is best known as the co-creator of both Judge Dredd and Strontium Dog for 2000 AD
or support indie stores by buying on
Copyright © 2020 American Booksellers Association