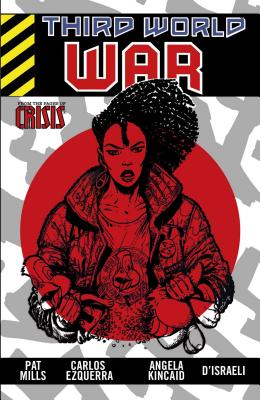 Eve is unemployed after leaving university and is immediately conscripted as a soldier working for a corporation and discovers just how South American countries are being exploited to create food needed to feed the increasing population for their profit under the guise of western paternalism. Written in the late 80s by Pat Mills (Nemesis the Warlock, Slaine) but even more relevant today as the concerns about global capitalism are even more pronounced in the public consciousness. Carlos (Judge Dredd) Ezquerra's painted colour artwork is a highlight of his long and distinguished career.

!Unashamedly polemic in its approach, and touching on everything from environmental politics, to food monopolies, to state surveillance, 3WW pre-empted the obsessions of current online activists by some quarter of a century" -- Ian McQuaid

Pat Mills is the creator and first editor of 2000 AD and co-creator of ABC Warriors, Finn, Flesh, Nemesis the Warlock and Slaine. In the US, Pat is best known for Marshal Law, the cult character he co-created with artist Kevin O'Neill.

Carlos Ezquerra was the co-creator of Judge Dredd, Strontium Dog, Rat Pack, Major Eazy and many other fan favourite characters, he designed the classic original Dredd costume as well as visually conceptualising Mega-City One. In addition to these credits he also illustrated A.B.C. Warriors, Judge Anderson, Tharg the Mighty, and Cursed Earth Koburn amongst many other stories. Outside of the ‘Galaxy’s Greatest Comic’, Ezquerra illustrated the first Third World War episodes in Crisis magazine, and become a regular collaborator with Garth Ennis, working on Adventures in the Rifle Brigade, Bloody Mary, Just a Pilgrim, Condors, The Magnificent Kevin and two special Preacher episodes. He died in 2018 but his profound influence on the world of comic art cannot be overstated.
Loading...
or
Not Currently Available for Direct Purchase