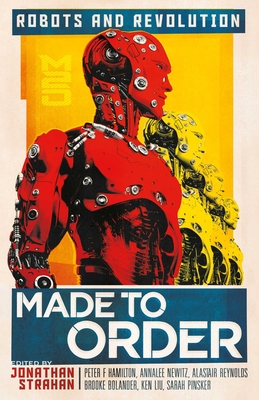 A cutting-edge anthology, published on the 100th anniversary of the word “Robot”, exploring the possibilities and place of robots in society going forwards.

100 years after Karel Capek coined the word, “robots” are an everyday idea, and the inspiration for countless stories in books, film, TV and games.

They are often among the least privileged, most unfairly used of us, and the more robots are like humans, the more interesting they become. This collection of stories is where robots stand in for us, where both we and they are disadvantaged, and where hope and optimism shines through.

Praise For Made to Order: Robots and Revolution…

"Jonathan Strahan's Infinity books stand with the very best original anthol ogy series ever in the field." * Locus * "Short stories have been the lifeblood of science fiction since HG Wells, and Solaris are maintaining the tradition." * Financial Times * "A stand-out collection that should be of interest to any admirer of short fiction, regardless of genre..." * The Guardian * "Breath-taking, staggering, sublime." * Tor.com *

Jonathan Strahan is a World Fantasy Award award-winning editor, anthologist, and podcaster. He has edited more than 70 books, is reviews editor for Locus, a consulting editor for Tor.com, and co-host and producer of the Hugo-nominated Coode Street Podcast.
Loading...
or support indie stores by buying on