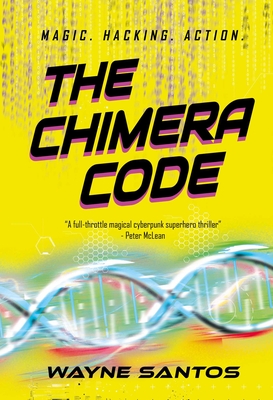 The Chimera Code (The Witchware Series)

Neuromancer for a non-binary age: an action-packed techno-thriller with a side of magical realism.

Everything's For Hire. Even Magic.

If you need something done, Cloke’s one of the best; a mercenary with some unusual talents and an attitude to match. But when she’s hired by a virtual construct to destroy the other copies of himself, and the down payment is a new magical skill, she knows this job is going to be a league harder than anything she’s ever done.

Praise For The Chimera Code (The Witchware Series)…

"Stylish, bad-ass, and above all immersive." - Edgar Cantero

“Snappy prose, electric action, crackling intersection of magic and technology, nano noir, adventure—what more do you want? Fans of science/fantasy will get the ride they’re looking for!” -- John Shirley, author of Stormland

Over the years, Wayne Santos has written copy for advertising agencies, scripts for television, and articles for magazines. He’s lived in Canada, Thailand and Singapore, traveling to many countries around South East Asia. His first love has always been science fiction and fantasy, and while he regularly engaged with it in novels, comics, anime and video games, it wasn’t until 1996, with his first short story in the Canadian speculative fiction magazine On Spec that he aimed towards becoming a novelist. He now lives in Canada, in Hamilton, ON with his wife. When he’s not writing, he is likely to be found reading, playing video games, watching anime, or trying to calm his cat down. He is currently represented by Jennie Goloboy at Donald Maass Literary.
Loading...
or support indie stores by buying on