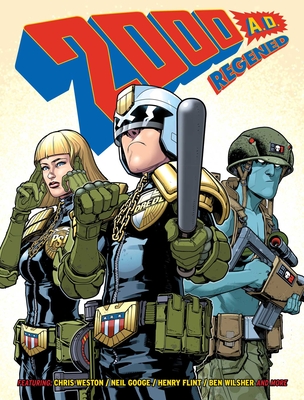 A thrill-powered collection for Earthlets of all ages!

"It’s great to see Rebellion do something new in targeting younger readers with such an uncynical and upbeat issue...especially with young women and people of colour front and centre in their character line-up ...packed with talented creators and original stories." -- Comics the Gathering
— Comics the Gathering

"The writing overflows with world-building and the end leaves you thirsty for more." -- All-Comic.con
— All-Comic.con

Alec Worley is a comics writer whose credits include Judge Dredd, Anderson, Age of the Wolf and Dandridge (all for 2000 AD), as well as Teenage Mutant Ninja Turtles and Star Wars (for Panini). He also writes fiction set in Games Workshop’s Warhammer universe.

John Reppion has been writing for thirteen years. He has written comics with wife Leah Moore, including The trial of Sherlock Holmes, The Complete Dracula, Shadow over Innsmouth, Raise The Dead, and Damsels, he is a regular columnist for TheDailyGrail.com and writes articles for Fortean Times magazine. He is tired. So tired. Will work for beer. @johnreppion www.moorereppion.com
Loading...
or support indie stores by buying on