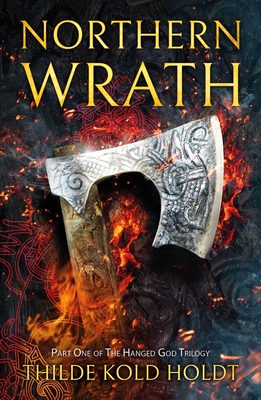 The bond between men and the gods is weakening.

A dead man walks between the worlds and foresees Odin’s doom.

The only survivor of a slaughter unleashes a monster from fiery Muspelheim.

Long hidden among mortals, a giantess sighs and takes up her magics once again.

A chief’s son must overcome war and treason to become the leader his people need.

And the final battle is coming...

“This is fantasy as it should be written: savage, liminal, full of wonder and magic.” -- Gavin G. Smith, author of The Bastard Legion series

"Packs a punch worthy of the Thunderer himself. It rocks!" -- Joanne Harris, author of The Gospel of Loki

“It has all a fantasy fan could want: gods, magic, large-scale battles, duels and magical creatures… Holdt will be a name to look out for in the genre for years to come.” -- FanFiAddict
— FanFiAddict

“A promising start for a series that will gratify lovers of epic tales.” -- Aurealis
— Aurealis

Thilde Kold Holdt is a Viking, traveller and a polygot fluent in Danish, French, English and Korean. As a writer, she is an avid researcher. This is how she first came to row for hours upon hours on a Viking warship. She loved the experience so much that she has sailed with the Viking ship the Sea Stallion ever since. Another research trip brought her to all corners of South Korea where she also learnt the art of traditional Korean archery. Born in Denmark, Thilde has lived in many places and countries, taking a bit of each culture with her. This is why she regards herself as simply being from planet Earth, as she has yet to set foot on Mars… Thilde is currently based in Southern France where she writes full-time.
Loading...
or support indie stores by buying on