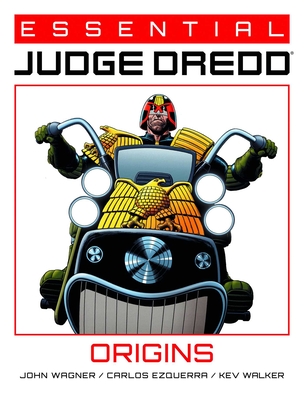 The essential Judge Dredd graphic novel series – the ultimate introduction to the Lawman of the Future!

The origin of Judge Dredd, and the Mega-City One Justice system – This is Judge Dredd: Year One

An unusual delivery is made to the Grand Hall of Justice, a package that will force Dredd to lead a mission into the Cursed Earth and into the darkest recesses of the history of the Judges and Mega-City One.

History is written by Dredd co-creators John Wagner (A History of Violence) and Carlos Ezquerra (Strontium Dog) with a special introductory tale featuring the art of Kev Walker (ABC Warriors: Khronicles of Khaos).

Carlos Ezquerra was the co-creator of Judge Dredd, Strontium Dog, Rat Pack, Major Eazy and many other fan favourite characters, he designed the classic original Dredd costume as well as visually conceptualising Mega-City One. In addition to these credits he also illustrated A.B.C. Warriors, Judge Anderson, Tharg the Mighty, and Cursed Earth Koburn amongst many other stories. Outside of the ‘Galaxy’s Greatest Comic’, Ezquerra illustrated the first Third World War episodes in Crisis magazine, and become a regular collaborator with Garth Ennis, working on Adventures in the Rifle Brigade, Bloody Mary, Just a Pilgrim, Condors, The Magnificent Kevin and two special Preacher episodes. He died in 2018 but his profound influence on the world of comic art cannot be overstated.

Kev Walker is the co-creator of Badlands and The Balls Brothers, and has also provided artwork for Dan Dare, Judge Dredd, Future Shocks, Harlem Heroes, Mercy Heights, Rogue Trooper, Time Twisters and Tor Cyan. For the Judge Dredd Megazine, he wrote The Inspectre and has illustrated Judge Anderson, Mean Machine and Wynter. Walker has recently finished an acclaimed run on DC’s L.E.G.I.O.N. and has pencilled Marvel Comics’ The Eternal.
Loading...
or support indie stores by buying on