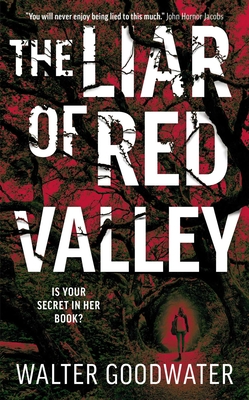 The Liar of Red Valley

Don’t trust the Liar.
Do not cross the King.
Never, ever go in the River.

In Red Valley, California, you follow the rules if you want to stay alive. But they won’t be enough to protect Sadie now that she’s become the Liar, the keeper of the town’s many secrets. Friendships are hard-won here, and it isn’t safe to make enemies.

And though the Liar has power — power to remake the world, with just a little blood—what Sadie really needs is answers: Why is the town’s sheriff after her? What does the King want from her? And what is the real purpose of the Liar of Red Valley?

Praise For The Liar of Red Valley …

"The mysteries are deeper, the stakes more personal..." -- Christina Henry, author of The Girl in Red on Revolution

"A New Weird tale with the verve and velocity of urban fantasy, The Liar of Red Valley is part horror, part thriller, part mythic fantasy. And all mystery, magic, and mendacity. You will never enjoy being lied to this much." -- John Hornor Jacobs, author of A Lush and Seething Hell and The Incorruptibles

"An American gothic tale with a strong and mystical hook that makes this book a serious page burner."
— FanFiAddict

"If you like stories of ordinary (and, okay, a little bit extraordinary) people up against supernatural forces, then The Liar of Red Valley comes heartily recommended."
— Starburst Magazine

"Goodwater has created a fun, mysterious adventure full of colourful characters, a beguiling little town and a book you won’t be able to put down until you’ve devoured every word."
— SciFiNow

"Thoroughly engrossing and with relentless pace, The Liar of Red Valley takes the reader through unexpected plot twists and false turns towards a surprising and dramatic endgame." -- Apple Books
— Apple Books

"Walter Goodwater is a writer who deserves a massive audience. His plotting and worldbuilding are second to none. This is one of my favorite books of the year." -- Christina Henry, author of the Black Wings books

"Goodwater is one of [the genre's] finest modern exponents" -- Simon Ings, The Times
— Simon Ings

Walter Goodwater is a writer, fencer, software developer, book-lover, and dad. His work has appeared on Tor.com, Crime Reads, and Barnes & Noble. He is the author of the Cold War Magic series, the latest book of which was nominated for a Dragon Award. His newest book, The Liar of Red Valley, is a story of magic, monsters, and secrets in a small rural California town, much like the one he grew up in. Today he lives on the Californian coast with his family, cats, and overflowing bookshelves.
Loading...
or support indie stores by buying on