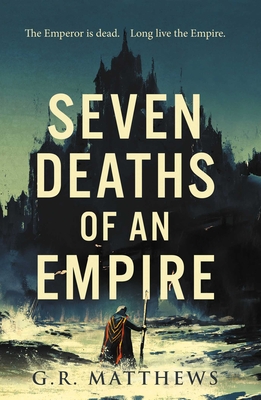 Seven Deaths of an Empire

Seven lives and seven deaths to seal the fate of an Empire...

The Emperor is dead. Long live the Empire.

General Bordan has a lifetime of duty and sacrifice behind him in the service of the Empire. But with rebellion brewing in the countryside, and assassins, thieves and politicians vying for power in the city, it is all Bordan can do to protect the heir to the throne.

Apprentice Magician Kyron was assigned to the late Emperor’s honour guard escorting his body on the long road back to the capital.

But even a magician’s power may fail when enemies emerge from the forests intent on seizing their precious cargo.

Praise For Seven Deaths of an Empire…

"(A) book that isn't short on action or imagination and the setting is an interesting change of pace, so check it out!" -- Mark Lawrence, author of Prince of Thorns, Prince of Fools
— Mark Lawrence

"It had plenty of twists and turns, and I was on the edge of my submarine pilot seat once or twice. The ending left lots of room for more adventure but wrapped up this particular part of the tale. It was very well done. I like Corin’s sense of humour too, so that was a plus." -- Super Star Drifter
— Super Star Drifter

“Corin Hayes' adventure in Silent City is an altogether more visceral first-person adventure set in a far future where humanity has fled beneath the waves to live in undersea cities. The story is packed with action from the first page which has our hero preparing for a beating to the last where our hero is... (spoilers, as Riversong would say).” -- Fantasy Hive
?
— Fantasy Hive

"Matthews delivers visceral descriptions of battle, the cut and thrust of gladius and pila, the shouldering of shields, the smell of blood and fear – and weaving through this, the delicate nets of magical constructs that can still snap, inflame or explode." -- The Fantasy Hive
— The Fantasy Hive

"A book which gathers speed and past the half-way mark begins to thunder towards an exciting conclusion." -- Mark Lawrence, author of Prince of Thorns

"It's exciting at every turn with a wonderfully spun plot that keeps you guessing the entire time." -- FanFi Addict
— Fanfiaddict

"A cracking read that will burn the candle in the night." -- Aurealis
— Aurealis

"Older teens and adults will enjoy the novel’s political intrigue and struggle to survive, which are reminiscent of George R. R. Martin’s Game of Thrones or a slightly less fantastical version of Jim Butcher’s Codex Alera series." -- Library Journal
— The Library Journal

"A magnificent, thoughtful, highly readable account, full of political intrigue and dripping with potent, dark atmosphere. This is a must read for fantasy fans who enjoy political machinations." -- Bookworm Blues
— Bookworm Blues

“It’s been a long time since a book made me swear out loud in horror... This is a story about politics, faith, betrayal and the loss of innocence, and I for one will be eagerly looking forward to a sequel.” -- Set the Tape
— Set the Tape

G. R. Matthews began reading in the cot. His mother, at her wits end with the constant noise and unceasing activity, would plop him down on the soft mattress with an encyclopaedia full of pictures then quietly slip from the room. Growing up, he spent Sunday afternoons on the sofa watching westerns and Bond movies after suffering the dual horror of the sounds of ABBA and the hoover (Vacuum cleaner) drifting up the stairs to wake him in the morning. When not watching the six-gun heroes or spies being out-acted by their own eyebrows he devoured books like a hungry wolf in the dead of winter. Beginning with Patrick Moore and Arthur C Clarke he soon moved on to Isaac Asimov. However, one wet afternoon in a book shop in his hometown, not far from the standing stones of Avebury, he picked up the Pawn of Prophecy and started to read – and soon Sci-Fi gave way to Fantasy. You can follow him on twitter @G_R_Matthews or visit his website at www.grmatthews.com.
Loading...
or support indie stores by buying on