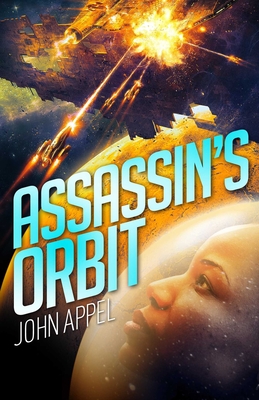 Golden Girls meets The Expanse with a side of Babylon Five

On the eve of the planet Ileri's historic vote to join the Commonwealth, the assassination of a government minister threatens to shatter everything. Private investigator Noo Okereke and spy Meiko Ogawa join forces with police chief Toiwa to investigate and discover clues that point disturbingly toward a threat humanity thought they had escaped.

"Assassin’s Orbit is the best kind of space thriller—twisty and explosive, it doesn’t stop, doesn’t flinch, and doesn’t hold back. I absolutely loved this book and the super-capable women at its explosive heart." -- Karen Osborne, author of Architects of Memory

"Combines a space station murder mystery with mature characters, with action beats, intrigue, diverse characters and an engaging plot and writing style."
— Nerds of a Feather

John Appel volunteered to jump out of planes before he’d ever been in a plane; his friends and family say this sums up his approach to life pretty well. He writes science fiction and fantasy and the occasional tabletop RPG adventure. A lifelong Marylander, he lives in the Baltimore suburbs with his wife and children. He masquerades as a technology risk manager to pay the bills after two decades as an information security pro. When not writing, rolling dice, or keeping the bad guys at bay, he enjoys rum and swords, but not both at the same time. John is a graduate of the Viable Paradise writing workshop.
Loading...
or
Not Currently Available for Direct Purchase