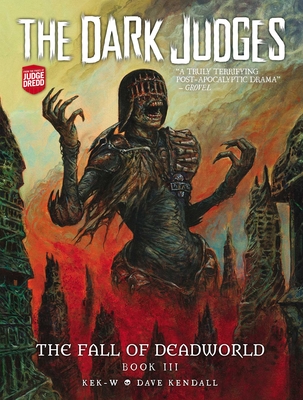 The Fall of Deadworld Book 3 - Doomed

Can humanity escape the icy clutches of Death?

The psychotic Chief Judge Casey Tweed has dethroned and killed Judge Death and taken over Death's mission to murder every living creature on the planet. The neighbouring Soviets have seen the chaos as an ideal time to launch an attack on their American enemies. As numerous battles rage a small group of rebels led by Judge Fairfax - some living, some already turned into the undead - launch a desperate effort to save their city from being converted into a necropolis, but it all seems too little too late. The Dark Judges are already spreading their contagion across the globe and in the depths of space, exterminating all life under the orders of Chief Judge Tweed. However, both the forces of death and the forces of life about to learn, just because Judge Death is dead, doesn’t mean that he is gone…

The acclaimed series from Kek-W (The Order) and Dave Kendall (Dreams of Deadworld) continues in this lavish hardback collection, including never seen before concept art and sketches.

Praise For The Dark Judges: The Fall of Deadworld Book 3 - Doomed…

“Definitely some of the most terrifying characters in comics” – Comics Alliance


“What was most shocking was how plausible and familiar the setting is. I guess what I mean is that this isn’t a science fiction pre-dystopia. It’s like Trump’s Presidency circa 2019 pre-dystopia.” – Multiversity.com

Kek-W is the writer and co-creator of The Order and The Fall of Deadworld for 2000 AD. He recently wrote Cap’n Dinosaur for Image Comics with artist Shaky Kane, as well as contributing to Wire magazine and Commando. He lives in Yeovil, South Somerset.

As well as being responsible for the morbid reimagining of the Dark Judges and their world as co-creator of The Fall of Deadworld, Dave Kendall has lent his visionary artistic talents to 2000 AD with several one-off stories. He was also the artist of Psycho Killer for Toxic! and has worked extensively as a fantasy illustrator for clients including Games Workshop and Wizards of the Coast.
Loading...
or support indie stores by buying on