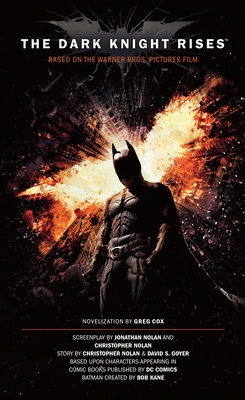 From the team that brought you Inception, The Dark Knight Rises is guaranteed to be the blockbuster hit of 2012. This enthralling official novelization will transport fans into a Gotham City once again under threat.

BATMAN and all related characters and elements are TM and © DC Comics. (s12)

Greg Cox is the New York Times bestselling author of several hugely popular Star Trek novels. He has also written successful novelizations and tie-ins for Countdown, Infinite Crisis and many more. Cox is a consulting editor for Tor Books and was nominated in 2008 for the Best Speculative Adapted Scribe Award for 52: The Novel.

"I would recommend this to anyone who wants to delve a bit deeper into the story, and find out more about the characters and their motivations." – Comic Book Movie

"Cox fills in the visual gaps with rich descriptions of the landscape and characters." – Wired

" A great souvenir of a terrific film." – SciFi Bulletin
or support indie stores by buying on
Copyright © 2020 American Booksellers Association