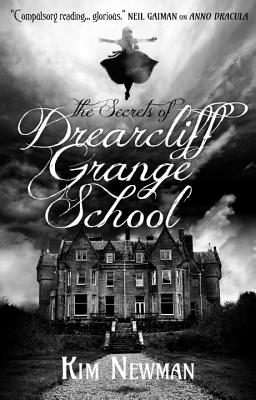 The Secrets of Drearcliff Grange School

A week after Mother found her sleeping on the ceiling, Amy Thomsett is delivered to her new school, Drearcliff Grange in Somerset. Although it looks like a regular boarding school, Amy learns that Drearcliff girls are special, the daughters of criminal masterminds, outlaw scientists and master magicians. Several of the pupils also have special gifts like Amy’s, and when one of the girls in her dormitory is abducted by a mysterious group in black hoods, Amy forms a secret, superpowered society called the Moth Club to rescue their friend. They soon discover that the Hooded Conspiracy runs through the School, and it's up to the Moth Club to get to the heart of it.

Praise For The Secrets of Drearcliff Grange School…

"If you’re looking for something to take your mind off the January blues, I’d recommend giving Kim Newman a run for your money." - Project Fandom

“Filled with entertaining characters and a plot that will keep you on the edge of your seat." -  Geek Hard

“Newman did an amazing job of crafting a world of super powers, and then showing readers that world through the eyes of a shy, and some what eccentric, young girl.” - Atomic Moo

"The school he has created may cause a few nightmares for sensitive readers, because some of the happenings are fascinatingly dark and twisted (there's something gorgeously macabre about these happenings)." - Rising Shadow

"For fans of Lovecraft, Harry Potter and the Ransom Riggs books, Drearcliff Grange is the girl’s boarding school equivalent of combining Hogwarts with the Miskatonic University and then having Miss Peregrine teach the courses. I cannot express how sad I was when the book was over and I had to go back to regular life.' - Fangirl Nation

Kim Newman is a well known and respected author and movie critic. He writes regularly for Empire Magazine and contributes to The Guardian, The Times, Time Out and others. He makes frequent appearances on radio and TV. He has won the Bram Stoker, International Horror Guild, British Fantasy and British Science Fiction Awards and been nominated for the Hugo and World Fantasy Awards.
Loading...
or
Not Currently Available for Direct Purchase