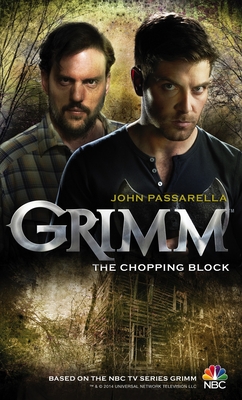 A cache of bones is found in a shallow grave in local woods... Meanwhile missing persons cases in Portland seem to be on the increase. As more bones are discovered, Portland homicide Detective Nick Burkhardt and his partner Hank Griffin investigate - but there seems to be no connection between the victims... A brand-new original story set in the Grimm universe.

Praise For Grimm: The Chopping Block…

"The Chopping Block is a good edition to the Grimm canon, and Passarella expands upon the television show." - The Moon is a Dead World

"A gripping and fast-paced read that never flags or lolls unnecessarily. It's the kind of book you can pick up and get lost in, finishing in the wee hours without meaning to." - Horror Talk

"The horror scenes are something out of a Stanley Kubrick movie." - Borg.com

"John Passarella clearly knows how to weave a tense thriller that’s appealing to both fans of the show and to new readers alike. The story is a great read with plenty of action and great dialogue. Passarella keeps you guessing as the plot unfolds, and there’s plenty of blood and carnage to go with all the suspense." - Ravenous Monster

"An entertaining read for Grimm fans." - City of Films

"If you love Grimm, you’ll want to pick up The Chopping Block. It’ll give you some extra time with the characters and universe you know and love, and it’s just a great book!" - Three If By Space