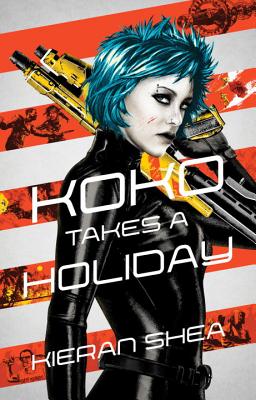 Five hundred years from now, ex-corporate mercenary Koko Martstellar is swaggering through an early retirement as a brothel owner on The Sixty Islands, a manufactured tropical resort archipelago known for its sex and simulated violence. Surrounded by slang-drooling boywhores and synthetic komodo dragons, the most challenging part of Koko’s day is deciding on her next drink. That is, until her old comrade Portia Delacompte sends a squad of security personnel to murder her.

"If you’re looking for a fun, violent, blood-and-gore sci-fi romp, you should check it out." - Pixelated Geek

"Kieran Shea's first novel is action-packed, fast-paced, violent, and full of cyberpunk fun. It's a brilliant ride that makes for a quick read, perfect for summer vacation." - Daily Crate

"Personally, I can’t wait to see Koko Martstellar in another book soon. If it’s even half as good as Koko Takes A Holiday it’ll be another hellacious ride I want to take." - Pop Cults

"The sheer breakneck speed of Koko Takes a Holiday, and the pseudo-cyberpunk posturing of Shea’s prose, are more than enough to propel you through this book cover to cover." - Giant Freakin Robot

"Plenty of explosions, bullets, wise cracks, and surprises will leave you wanting more. And the best news is that Koko the Mighty will be out in Summer 2015. Yippee-Ki-Yay… this book completely rocks." - Geek Dad

"An extremely fast-paced chunk of science fiction space operetta with attitude...Shea is a name to look out for, and I can only see his work getting better and better." - Adventures in SciFi Publishing

"Fans of far out there science fiction works similar to what movie fans would expect from a Quentin Tarantino flick will feel right at home." - BGG Magazine

"It’s no secret that I loved Kieran Shea’s debut." -  My Bookish Ways

"This book looks absolutely bonkers, and it’s one that we’re itching to read." - BuzzFeed Community

"Koko Takes a Holiday is a nonstop, bloody thrill ride with the all the subtlety of a rocket launcher, and I loved every minute of it. And the ending? Well, you’ll see-it’s a jawdropper. Kieran Shea will blow you away, promise. More Koko please!!" - My Bookish Ways

"Reminiscent of Takeshi Kovaks from Richard K. Morgan’s Altered Carbon with a dash of Tank Girl attitude, Koko is memorable character. The violence is quite extreme, so the squeamish should probably look elsewhere, but this is a fun gender reversal of your typical shoot-em-up" -Library Journal

Kieran Shea's fiction has appeared in many publications including Ellery Queen Mystery Magazine, Thuglit, Dogmatika, and Crimefactory. He has been nominated for the Story South's Million Writers Award twice. He lives in Annapolis, Maryland.
Loading...
or
Not Currently Available for Direct Purchase