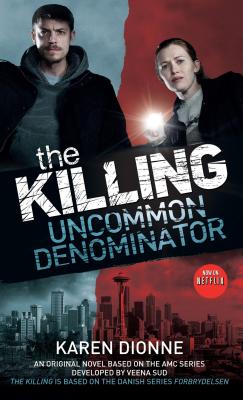 When firefighters respond to a suspected meth explosion at a trailer park, they discover a man’s body, unburned but with terrible head wounds. Meanwhile, another man is discovered in a shipping container at the Port of Seattle, shot execution-style. For Homicide Detective Sarah Linden, two cases soon become one, and she must unravel a complex web of addiction, greed, and betrayal to reveal the killer.

Praise For The Killing: Uncommon Denominator…

"Possibly the best part of this book is that you don’t have to be a fan of the show to understand it. It’s a solid story on its own, and even though it’s being marketed as a tie-in to the show’s upcoming fourth season, I’d suggest it as summer reading to anyone who enjoys murder mysteries." - We The Nerdy

"The plot is tight and, without giving anything away, delivers an engaging story set around familiar themes that the viewer will recognize from the TV show." - Cinema Sentries

"A satisfying page turner, and one that concludes more satisfactory than the season three finale." -Examiner

"A good quick and dirty mystery. It’s got some tension, some suspense, and for any fan of the show, more time with the characters you already invested in and appreciate." - Project Fandom

Karen Dionne is the internationally published author of Boiling Point, an environmental thriller about an erupting volcano, a missing researcher, and a radical scheme to end global warming. Karen's first science thriller, Freezing Point, was nominated by RT Book Reviews as Best First Mystery of 2008. She also serves on the board of directors of the International Thriller Writers association.
Loading...
or
Not Currently Available for Direct Purchase