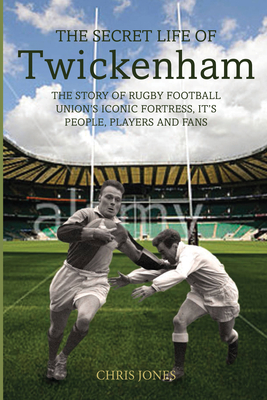 The Secret Life of Twickenham (Hardcover)

The Story of Rugby Union's Iconic Fortress, the Players, Staff and Fans

Twickenham Stadium is rightly venerated as the home of the Rugby Football Union (RFU). While it may bask in this fame, the stadium's beginnings were very humble. The land it was built upon was purchased in 1907 and would subsequently become the home to the Harlequins who would play the first ever match against Richmond.ÿ

The first England test match didn't take place until 1910 and a home win ensured things got off on the right footing but cows, sheep and horses would be grazing on the pitch just four years later as the stadium became a farm during the First World War. The first Varsity match was played in December 1921, by which time the popularity of Twickenham had soared. Extra accommodation was created in the North Stand, built in 1925 by the legendary football stadium architect, Archibald Leitch. By 1931, the famous `Twickenham Look' had come about.ÿ

When the Second World War arrived, the ground became a Civil Defence depot, and the closest it got to being hit by enemy action was in July 1944 when a V1 flying bomb fell in the front garden of a house opposite the West Gate, injuring sixteen people. The car park was dug up and - appropriately given its original use - turned into allotments to generate much needed fresh food for the locals. The stadium today is at the heart of a multi-million pound business that the RFU controls, but how does it generate so much money from this one plot of land?ÿ

With such a colourful and celebrated history The Secret Life of Twickenham will dig deeper into it's history to reveal the many men and women, cutting across all social backgrounds, jobs, and positions within the RFU who have helped to build this iconic stadium into a globally recognised brand. It will reveal to all fans of rugby union the true history of the most iconic sports stadium in the British Isles with a compendium of facts, dates, figures and revealing anecdotes of England's sporting fortress.ÿ

CHRIS JONES has reported every Rugby World Cup for theÿEvening Standardÿsince 1987 and is celebrating 30 years of covering England at international level in November 2013. A former Chairman of the Rugby Union Writers' Club and the Lawn Tennis Writers' Association. He was a member of the 1995 Rugby World Cup MediaÿOrganising Committee. He lives in London.

Praise For The Secret Life of Twickenham: The Story of Rugby Union's Iconic Fortress, the Players, Staff and Fans…

'This is a fascinating and illuminating insight into Twickenham, the greatest rugby stadium in the World.'

'This is a fascinating and illuminating insight into Twickenham, the greatest rugby stadium in the World.'

`Fascinating book. The colourful characters who have worked at Twickenham down the years tell their extraordinary stories in print for the first time and there are eyebrow-raising facts at every turn.'

‘Fascinating book. The colourful characters who have worked at Twickenham down the years tell their extraordinary stories in print for the first time and there are eyebrow-raising facts at every turn.’