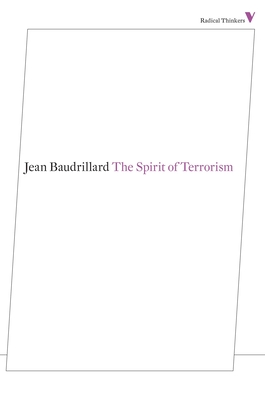 The Spirit of Terrorism (Radical Thinkers)

Baudrillard sees the power of the terrorists as lying in the symbolism of slaughter—not merely the reality of death, but in a sacrifice that challenges the whole system. Where previously the old revolutionary sought to conduct a struggle between real forces in the context of ideology and politics, the new terrorist mounts a powerful symbolic challenge which, when combined with high-tech resources, constitutes an unprecedented assault on an over-sophisticated and vulnerable West. This new edition is up-dated with the essays “Hypotheses on Terrorism” and “Violence of the Global.”

Praise For The Spirit of Terrorism (Radical Thinkers)…

“What he calls the ‘spirit of terrorism’ is the waking nightmare of fantasy become reality, which means that in the West, we are all, whether of the right or left, now engaged in a murderous game, the rules of which are constantly being changed, not according to the globalized strategies of the western powers, but according to the inscrutable, ultimately unknowable, demands of ‘the enemy’ ... Baudrillard ... offers a sober and hard-headed commentary on the events of September 11 and their aftermath. Significantly, there is no trace of the specious and pretensious nihilism that is so often claimed as the hallmark of his thinking. Rather, he offers a clear analysis of the terrible miscalculations in the West that have brought us to this point, and which seem to offer us no way back from the spectral ‘war on terrorism.” —New Statesman

“... philosophical perfection. Each book [in the Verso series of 9-11] offers powerful and highly readable commentary that whirlwinds around the specter of the towers, and together the texts raise an indelibly valuable dialogue where many are still afraid to step. Unbreakable, these volumes are filled with extraordinary ideas and ideals that slowly piece together from one poetic line to the next.” —XLR8R Magazine

“First prize for cerebral coldbloodedness goes to French philosopher Jean Baudrillard ... It takes a rare, demonic genius to brush off the slaughter of thousands on the grounds that they were suffering from severe ennui brought about by boring modern architecture.” —New York Times Book Review

Jean Baudrillard (1929–2007) began teaching sociology at the Université de Paris-X in 1966. He retired from academia in 1987 to write books and travel until his death in 2007. His many works include Simulations and Simulacra, America, The Perfect Crime, The System of Objects, Passwords, The Transparency of Evil, The Spirit of Terrorism, and Fragments, among others.
Loading...
or support indie stores by buying on
(This book is on backorder)