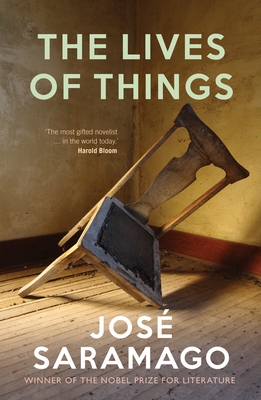 The Lives of Things

Combining bitter satire, outrageous parody and uncanny hallucinations, this collection of José Saramago’s earliest stories from the beginning of his writing career attests to the novelist’s imaginative power and incomparable skill in elaborating the most extravagant fantasies. Each tale is a wicked, surreal take on life under dictatorship: in ‘Embargo’ a man drives around a city that is slowly running out of petrol; ‘The Chair’ recounts what happens when dictator Salazar falls off his chair and dies; in the Kafkaesque ‘Things’ the life of a civil servant is threatened as objects start to go missing.

Praise For The Lives of Things…

“The most gifted novelist ... in the world today.”—Harold Bloom

“Saramago is a writer, like Faulkner, so confident of his resources and ultimate destination that he can bring any improbability to life.”—John Updike, New Yorker

“No one writes quite like Saramago, so solicitous and yet so magnificently free. He works as though cradling a thing of magic.”—Steven Poole, Guardian

“These early stories are a reminder of why he deserved the Nobel prize.”—Scotland on Sunday

“Bittersweet beauty but also a wickedly mischievous sense of humour ... parables in human compassion, celebrating the triumph of the human spirit.”—Irish Times

“An intriguing coda to a fascinating career.”—Metro

“One of the giants of European literature ... For new readers, this collection is an essential introduction to Saramago’s concerns with social decay, alienation and political repression and the alternatives to them. For devotees, it is one to savour.”—Morning Star

“Here, the literary lion experiments with shorter, more inventive forms, and the results are lucid and impressive...Saramago’s considerable talent is clearly manifest.”—Publishers Weekly

“The Lives of Things is a wonderful artifact ... it is, like all his books, intoxicating reading...Moribund, absurd, flickering quickly between mirth and horror, these stories are filled with the master scribe’s sibylline ruminations on mortality and language, and a gentle, blossoming beauty.”—Fast Forward Weekly

“Saramago’s prose is richly colorful, descriptive and frequently verges on shocking without being excessive. It is easy to fall into the trap of reading the same paragraph over and over again, luxuriating in the gorgeous, strange yet precise word choice but without being stuck.”—Aleksandra Fazlipour, Three Percent

The Portuguese Nobel Laureate Jose? Saramago was a novelist, playwright and journalist. His numerous books, including the bestselling All the Names, Blindness, and The Cave, have been translated into more than forty languages and have established him as one of the world’s most influential writers. He died in June 2010.

Giovanni Pontiero (1932–1996) was the ablest translator of twentieth century literature in Portuguese and one of its most ardent advocates. He was the principal translator into English of the works of José Saramago and was awarded the Teixeira-Gomes Prize for his translation of The Gospel According to Jesus Christ.
Loading...
or
Not Currently Available for Direct Purchase