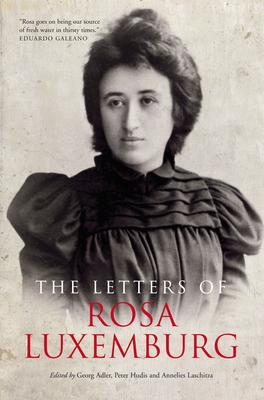 The Letters Of Rosa Luxemburg

The most comprehensive collection of letters by Rosa Luxemburg ever published in English, this book includes 190 letters written to leading figures in the European and international labor and socialist movements––Leo Jogiches, Karl Kautsky, Clara Zetkin and Karl Liebknecht––who were among her closest friends, lovers and colleagues. Much of this correspondence appears for the first time in English translation; all of it helps to illuminate the inner life of this iconic revolutionary, who was at once an economic and social theorist, a political activist and a lyrical stylist. Her political concerns are revealed alongside her personal struggles within a socialist movement that was often hostile to independently minded women. This collection will provide readers with a newer and deeper appreciation of Luxemburg as a writer and historical figure.

Praise For The Letters Of Rosa Luxemburg…

"One cannot read the writings of Rosa Luxemburg, even at this distance, without an acute yet mournful awareness of what Perry Anderson once termed ‘the history of possibility.’"—Christopher Hitchens, Atlantic

"She emerges as one of the most emotionally intelligent socialists in modern history, a radical of luminous dimension whose intellect is informed by sensibility, and whose largeness of spirit places her in the company of the truly impressive."—Vivian Gornick, Nation

"Wonderful ... The self-portrait in these pages is that of a professional revolutionary whose vocation is, if you'll pardon the expression, spiritual. Reading ... this book, I could not help falling in love with you, dear Rosa."—Scott McLemee, Bookforum

"Transports us directly into the private world of a woman who has never lost her inspirational power as an original thinker and courageous activist."—Sheila Rowbotham, Guardian

"The Letters of Rosa Luxemburg come as near as anything to the way this extraordinary woman talked with loved ones and friend ... a wonderfully compelling record, both poignant and timely."—Observer

"Rosa Luxemburg’s letters, with all their exquisite details, read as well as any novel ... Personal or political, they are beautiful, powerful, and succinct."—Idiom

"The Letters of Rosa Luxemburg is a ... kind of memorial, a kind of sliver of one woman’s life bound together in one place ... Rosa Luxemburg comes alive in these pages ... if you love or admire or are just fascinated by her, then you’ve no excuse not to buy this excellent book."—PopMatters

Rosa Luxemburg (1871–1919) was a Polish-born Jewish revolutionary and one of the greatest theoretical minds of the European socialist movement. She participated in the founding of the German Communist Party and the Spartacist insurrection in Berlin in 1919.
Loading...
or
Not Currently Available for Direct Purchase