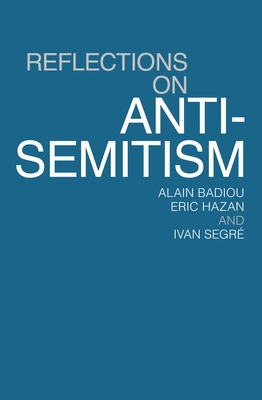 Since the inception of the “War on Terror,” Israel has become increasingly important to Western imperial strategy and ever more aggressive in its policies towards the Palestinians. A key ideological weapon in this development is the cynical and unjustified accusation of “anti-Semitism” to silence protest and dissent.

For historical reasons, this tactic has been deployed most forcefully in France, and in the first of the two essays in this book French writers Alain Badiou and Eric Hazan demolish the “anti-Semitism is everywhere” claim used to bludgeon critics of the Israeli state and those who stand in solidarity with the banlieue youth.

In “The Philo-Semitic Reaction,” Ivan Segré undertakes a meticulous deconstruction of a rampant reactionary trend that identifies Jewish interests with the “democratic” West. Segré’s aim is to uphold a universalist position and to defend Jewish tradition from Zionist ideological distortion.

Alain Badiou teaches philosophy at the Ecole normale superieure and the College international de philosophie in Paris. Eric Hazan is the founder of the publisher La Fabrique and the author of several books. Ivan Segré is a doctor in philosophy and student of the Talmud who lives in Israel. He is also the author of Qu’appelle-ton penser Auschwitz?

Praise For Reflections On Anti-Semitism…

“The calm and smiling power [of Segré’s work] lies in the logical rigor with which he reads texts.”
—Daniel Bensaïd

“French anti-Semitism is a very different animal to the diffuse form that has existed in the UK and these essays … help us comprehend its complexities. Walking round Tel Aviv nowadays you are more likely to hear French spoken than English. Reading these essays it is not difficult to understand why.”
—Birmingham Jewish Recorder
or
Not Currently Available for Direct Purchase
Copyright © 2020 American Booksellers Association