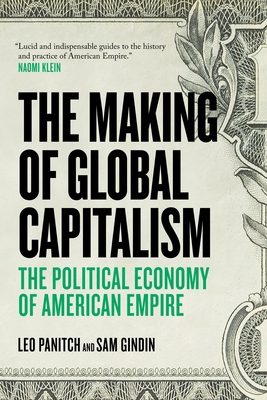 The Making Of Global Capitalism

The Political Economy Of American Empire

The all-encompassing embrace of world capitalism at the beginning of the twenty-first century was generally attributed to the superiority of competitive markets. Globalization had appeared to be the natural outcome of this unstoppable process. But today, with global markets roiling and increasingly reliant on state intervention to stay afloat, it has become clear that markets and states aren’t straightforwardly opposing forces.

In this groundbreaking work, Leo Panitch and Sam Gindin demonstrate the intimate relationship between modern capitalism and the American state. The Making of Global Capitalism identifies the centrality of the social conflicts that occur within states rather than between them. These emerging fault lines hold out the possibility of new political movements that might transcend global markets.

Praise For The Making Of Global Capitalism: The Political Economy Of American Empire…

"Lucid and indispensable guides to the history and practice of American Empire."—Naomi Klein, award-winning journalist and author of The Shock Doctrine

"A must read for everyone who is concerned about where the future of capitalism might lie."—David Harvey, CUNY Graduate Center, author of A Brief History of Neoliberalism

Sam Gindin is the former Research Director of the Canadian Autoworkers Union and Packer visiting Chair in Social Justice at York University. Among his many publications, he is the author (with Greg Albo and Leo Panitch) of In and Out of Crisis: The Global Financial Meltdown and Left Alternatives.

Leo Panitch is Canada Research Chair in Comparative Political Economy and Distinguished Research Professor of Political Science at York University. Editor of The Socialist Register for twenty-five years, his many books include Working Class Politics in Crisis; A Different Kind of State; The End of Parliamentary Socialism; and American Empire and the Political Economy of Global Finance.
Loading...
or
Not Currently Available for Direct Purchase