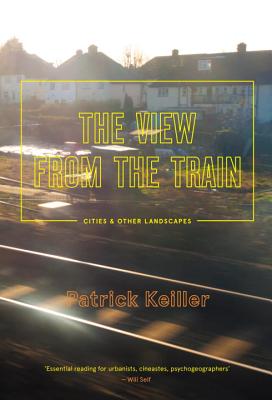 The View from the Train

Cities and Other Landscapes

" Robinson believed that, if he looked at it hard enough, he could cause the surface of the city to reveal to him themolecularbasis of historical events, and in this way he hoped to see into the future. "
In his sequence of films, Patrick Keiller retraces the hidden story of the places where we live, the cities and landscapes of our everyday lives. Now, in this brilliant collection of essays, he offers a new perspective on how Britain works and sees itself. He discusses the background to his work and its development from surrealism to post-2008 economic catastrophe and expands on what the films reveal.
Referencing writers including Benjamin and Lefebvre, the essays follow his career since the late 1970s, exploring themes including the surrealist perception of the city; the relationship of architecture and film; how cities change over time, and how films represent this; as well as accounts of cross-country journeys involving historical figures, unexpected ideas and an urgent portrait of post-crash Britain.


Praise For The View from the Train: Cities and Other Landscapes…

"His research into the structure of everyday life is parlayed into devious fiction, and the drear actualities of city and country yield surprisingly ravishing images."—Brian Dillon

"Our most original geographical and political thinker."—Owen Hatherley, Guardian

"Together [Keiller’s Robinson films] represent, aesthetically and politically, some of the most enlivening work produced in contemporary British cinema," Radical Philosophy

"The hallmarks of Keiller’s work: a politics that forsakes dogma for an undeniable love of Britain’s landscape and people. What more can we say?" Guardian

"An exaltation of life counters the intimations of extinction, trumping the polemical despair."—New York Times

Patrick Keiller s films include the celebrated "London" (1994), "Robinson in Space" (1997), "The Dilapidated Dwelling" (2000), and "Robinson in Ruins" (2010). He has devised large-scale installations including "Londres, Bombay" (Le Fresnoy, Tourcoing, 2006) and "The Robinson Institute" (Tate Britain, London, 2012), the latter accompanied by a book "The Possibility of Life's Survival on the Planet." He was a Research Fellow at the Royal College of Art, London (2002-2011), and has taught in schools of art."
Loading...
or
Not Currently Available for Direct Purchase