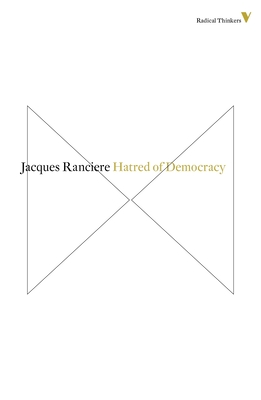 In this vehement defence of democracy, Jacques Rancière explodes the complacency of Western politicians who pride themselves as the defenders of political freedom. As America and its allies use their military might in the misguided attempt to export a desiccated version democracy, and reactionary strands in mainstream political opinion abandon civil liberties, Rancière argues that true democracy—government by all—is held in profound contempt by the new ruling class. In a compelling and timely analysis, Hatred of Democracy rethinks the subversive power of the democratic ideal.

“This tastily sardonic essay is partly a scholarly sprint through the history of political philosophy, and partly a very enjoyable stream of insults directed at rival penseurs.” —Guardian

“A piercing essay on the definitions and redefinitions of the term ‘democracy.’” —Times Higher Education Supplement

“In our time of the disorientation of the left, Rancière’s writings offer one the few consistent conceptualizations of how are to continue to resist.” —Slavoj Žižek