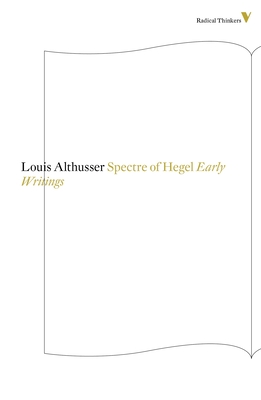 The Spectre Of Hegel

Louis Althusser is remembered today as the scourge of humanist Marxism, but that was his later incarnation, an identity formed by years grappling with the intellectual inheritance of Hegel and Catholicism. The Spectre of Hegel collects the writings of the young Althusser, before his final epistemological break with the philosopher’s work in 1953. Including his famed essay ‘Ideology and Ideological State Apparatuses’, The Spectre of Hegel gives a unique insight into Althusser’s engagement with a philosophy he would later renounce.

Praise For The Spectre Of Hegel: Early Writings (Radical Thinkers #8)…

“The most prominent and innovative Marxist thinker of the postwar period in France.” —John Sturrock, The Word from Paris: Essays on Modern French Thinkers and Writers

“[The Spectre of Hegel] proves novel and interesting, filling a gap in our understanding of Althusser's development and allowing us to see some of the lines of thinking which led him to structuralism and thereby to notoriety.” —Capital and Class

Louis Althusser was born in Algeria in 1918 and died in France in 1990. He taught philosophy for many years at the Ecole Normale Superieur in Paris, and was a leading intellectual in the French Communist Party. His books include For Marx; Reading Capital (with Etienne Balibar); Essays in Ideology; Politics and History: Montesquieu, Rousseau, Marx; Machiavelli and Us; and The Spectre of Hegel.
Loading...
or
Not Currently Available for Direct Purchase