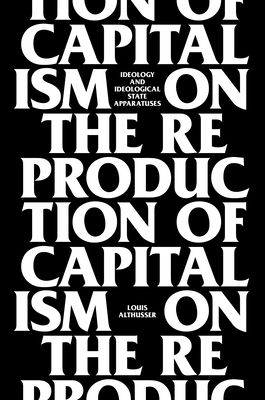 On The Reproduction Of Capitalism

Louis Althusser’s renowned short text ‘Ideology and Ideological State Apparatuses’ radically transformed the concept of the subject, the understanding of the state and even the very frameworks of cultural, political and literary theory. The text has influenced thinkers such as Judith Butler, Ernesto Laclau and Slavoj Žižek.

The piece is, in fact, an extract from a much longer book, On the Reproduction of Capitalism, until now unavailable in English. Its publication makes possible a reappraisal of seminal Althusserian texts already available in English, their place in Althusser’s oeuvre and the relevance of his ideas for contemporary theory. On the Reproduction of Capitalism develops Althusser’s conception of historical materialism, outlining the conditions of reproduction in capitalist society and the revolutionary struggle for its overthrow.

Written in the afterglow of May 1968, the text addresses a question that continues to haunt us today: in a society that proclaims its attachment to the ideals of liberty and equality, why do we witness the ever-renewed reproduction of relations of domination? Both a conceptually innovative text and a key theoretical tool for activists, On the Reproduction of Capitalism is an essential addition to the corpus of the twentieth-century Left.

Praise For On The Reproduction Of Capitalism: Ideology And Ideological State Apparatuses…

‘The elegant theorist, the man who redefined the concept of
“ideology”’—Alice Kaplan, Los Angeles Review of Books

‘One of the most important Marxist thinkers of the twentieth century … nothing short of electric. His renewal of Marxism represented a liberation for a younger generation’ —Radical Philosophy

"One reads him with excitement. There is no mystery about his capacity to inspire the intelligent young."—Eric Hobsbawm

"Louis Althusser influenced so many discourses, actions and existences by the radiant and provocative force of his thought."—Jacques Derrida

Louis Althusser was born in Algeria in 1918 and died in France in 1990. He taught philosophy for many years at the Ecole Normale Supérieure in Paris, and was a leading intellectual in the French Communist Party. His books include For Marx; Reading Capital (with Étienne Balibar); Essays in Ideology; Politics and History: Montesquieu, Rousseau, Marx; Machiavelli and Us; and The Spectre of Hegel.
Loading...
or
Not Currently Available for Direct Purchase