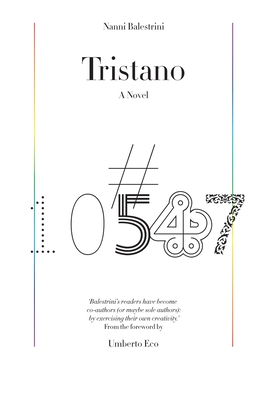 Inspired by the legend of Tristan and Isolde, Tristano  was first published in 1966 in Italian. But only recently has digital technology made it possible to realise the author’s original vision. The novel comprises ten chapters, and the fifteen pairs of paragraphs in each of these are shuffled anew for each published copy. No two versions are the same. The random variations between copies enact the variegations of the human heart, as exemplified by the lovers at the centre of the story.

The copies of the English translation of Tristano  are individually numbered, starting from 10,000 (running sequentially from the Italian and German editions). Included is a foreword by Umberto Eco explaining how Balestrini’s experiment with the physical medium of the novel demonstrates
‘that originality and creativity are nothing more than the chance handling of a combination’.

“Goodbye Gutenberg. Many alternative ways of spreading the adventure of literature are emerging. This exercise by Balestrini is absolutely central.”—La Stampa

“Finally the historical impasse between literature and new media ... turns into an opportunity to create something radically new.”—Aldo Nove, Il Sole 24 Ore

“Balestrini has created with Tristano a kind of poetry of the language ... promoting language to the role of protagonist, that is of hero, and where in traditional novels language voices the hero’s thoughts and actions, in this new Tristano language voices itself and celebrates its The Unseen wide number of opportunities and movements.”—Angelo Guglielmi, L’Unità

"Balestrini's experiment focuses on attacking the twin myths of the creative genius and culture as property."—Rhizome

Nanni Balestrini is a poet and novelist, cultural and political activist. He began publishing his poetry in the early 1950s and wrote his first computer-aided poem Tape Mark I in 1961. In 1973, he joined the movement Autonomia Operaia and on April 7, 1979 was accused of subversive association and involvement in 19 murders, including Aldo Moro. He took refuge in Paris until the charges were dropped. His novel, The Unseen, is also available from Verso.
Loading...
or
Not Currently Available for Direct Purchase