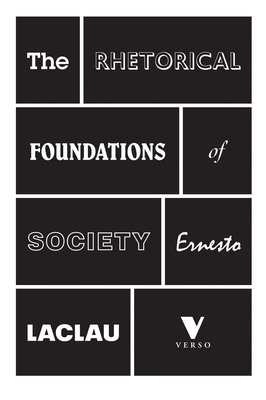 The Rhetorical Foundations Of Society

The essays collected in this volume develop the theoretical perspective initiated in Laclau and Mouffe's classic Hegemony and Socialist Strategy, taking it in three principal directions. First, this book explores the specificity of social antagonisms and answers the question "What is an antagonistic relation?"—an issue which has become increasingly crucial in our globalized world, where the proliferation of conflicts and points of rupture is eroding their links to the social subjects postulated by classical social analysis. This leads Laclau to a second line of questioning: "What is the ontological terrain that allows us to understand the nature of social relations in our heterogeneous world?" This is a task he addresses with theoretical instruments drawn from analytical philosophy and from the phenomenological and structuralist traditions. Finally, central to the argument of the book is the basic role attributed to rhetorical tropes—metaphor, metonymy, catachresis—in shaping the "non-foundational" grounds of society.

Praise For The Rhetorical Foundations Of Society…

Praise for On Populist Reason:

"What needs to be politically articulated at the present time is the possibility of a leftist populism. This is what makes Laclau's long-awaited book so important. Arguably, populism has always been the governing concept in Laclau's work and in On Populist Reason, he lays out his position with great power and analytical clarity."—Simon Critchley

Ernesto Laclau is Emeritus Professor at the University of Essex, Great Britain, and in the past has been Distinguished Professor of Humanities and Rhetorical Studies at Northwestern University and also Distinguished Professor at the Department of Comparative Literature, State University of New York (Buffalo). He is author of numerous books on Political Theory and Philosophy. He has extensively lectured in many universities in North America, Latin America, Europe, Australia and South Africa..
Loading...
or
Not Currently Available for Direct Purchase