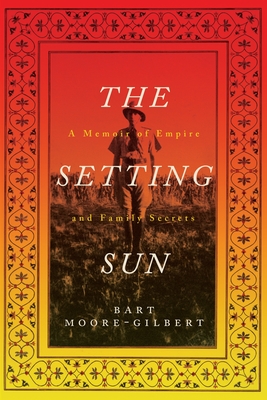 A Memoir of Empire and Family Secrets

"I've always had difficulty imagining my father as a policeman. He seemed most himself in the informal setting of safari life, clothes disheveled, sometimes not shaving for days. So why did he join the Indian Police, with its rigid hierarchies and complex protocols?"

Setting Sun is the story of the dying days of an empire, combined with gripping family history, in an extraordinary literary voyage across India.

When a letter from an Indian historian arrives out of the blue, informing leading academic Moore Gilbert that his beloved, deceased father, a member of the Indian Police before Independence, partook in the abuse of civilians, Moore Gilbert's world is shaken as his cherished childhood memories are challenged. He sets out in search of the truth—discovering much about the end of empire, the state of India today, and whether his father, as one of the many characters on his quest claims, really was a terrorist.

Crisscrossing western India, and following leads from bustling Mumbai to remote rural scenes, Moore-Gilbert finally pieces together the truth, ultimately discovering that the same story links the past with the present, colonial India with its modern incarnation, terrorism through the ages and father with son.

Bart Moore-Gilbert was born in Tanzania and studied in Britain. He is currently a Professor of Postcolonial studies at Goldsmith's College, London, and the author of, among others, Postcolonial Theory and Hanif Kureishi.
Loading...
or
Not Currently Available for Direct Purchase