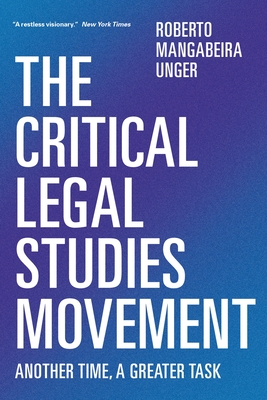 Another Time, A Greater Task

Critical legal studies is the most important development in progressive thinking about law of the past half century. It has inspired the practice of legal analysis as institutional imagination, exploring, with the materials of the law, alternatives for society. The Critical Legal Studies Movement was written as the manifesto of the movement by its central figure. This new edition includes a revised version of the original text, preceded by an extended essay in which its author discusses what is happening now and what should happen next in legal thought.

Praise For The Critical Legal Studies Movement: Another Time, A Greater Task…

“A philosophical mind out of the Third World turning the tables to become a synoptist and seer of the First.”
—Perry Anderson

“One of the few living philosophers whose thinking has the range of the great philosophers of the past.”
—Lee Smolin, Times Higher Education Supplement

“An ambitious and impressive undertaking … A carefully crafted statement with ideas interlocked like a chain-link fence that stretches as far as the eye can see.”
—New York Times Book Review

Roberto Mangabeira Unger is one of the leading philosophers, political thinkers, and legal theorists in the world today. Verso publishes his social theory books, False Necessity, Social Theory: Its Situation and Its Task, and Plasticity into Power; his programmatic writings, Democracy Realized and The Left Alternative; and his other major work in legal theory, What Should Legal Analysis Become?
Loading...
or
Not Currently Available for Direct Purchase