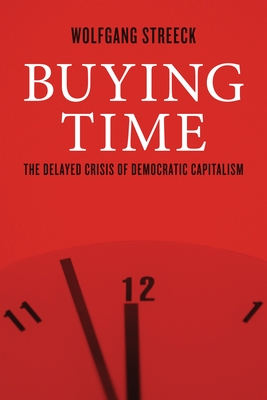 The Delayed Crisis of Democratic Capitalism

The financial crisis keeps us on edge and creates a diffuse sense of helplessness. Well-nigh unfathomable problems lead to measures that seem like emergency operations on the open heart of the Western world, performed with no knowledge of the patient's clinical history. The gravity of the situation is matched by the paucity of our understanding of it, and of how it came about in the first place.

In this book, compiled from his Adorno Lectures given in Frankfurt, Wolfgang Streeck lays bare the roots of the present financial, fiscal and economic crisis, seeing it as part of the long neoliberal transformation of postwar capitalism that began in the 1970s. Linking up with the crisis theories of that decade, he analyses the subsequent tensions and conflicts involving states, governments, voters and capitalist interests—a process in which the defining focus of the European state system has shifted from taxation through debt to budgetary “consolidation.” The book then ends by exploring the prospects for a restoration of social and economic stability. Buying Time is a model of enlightenment. It shows that something deeply disturbing underlies the current situation: a metamorphosis of the whole relationship between democracy and capitalism.

Praise For Buying Time: The Delayed Crisis of Democratic Capitalism…

“For anyone interested in understanding the bind democracies are in, this is a vital if sobering book which has a troubling, if convincing, conclusion.”
—Matthew Lawrence, Prospect

“Is electoral democracy compatible with the type of economic policies the EU—backed at a distance by Washington and Wall Street—wants to impose? This is the question posed by the Cologne-based sociologist Wolfgang Streeck in Buying Time, a book that is provoking debate in Germany. Streeck argues that since Western economic growth rates began falling in the 1970s, it has been increasingly hard for politicians to square the requirements of profitability and electoral success; attempts to do so (‘buying time’) have resulted in public spending deficits and private debt. The crisis has brought the conflict of interests between the financial markets and the popular will to a head: investors drive up bond yields at the ‘risk’ of an election. The outcome in Europe will be either one or the other, capitalist or democratic, Streeck argues; given the balance of forces, the former appears most likely to prevail. Citizens will have nothing at their disposal but words—and cobblestones.”
—Susan Watkins, London Review of Books

“Streeck has here provided an excellent and challenging account of the current state of relations between capitalism and democracy. His concept of a state whose democratic responsibilities to voters are required systematically to be shared with and often trumped by those to creditors takes us a major step forward.”
—Colin Crouch, author of Coping With Post-Democracy

“Argues that ever since the 1970s, governments in the west have been ‘buying time’ for the existing social and political order … a timely corrective.”
— Larry Elliott, Guardian

“In its best parts—when political passion connects with critical exposition of the facts and incisive argument—Streeck’s sweeping and empirically founded inquiry reminds one of Karl Marx’s Eighteenth Brumaire of Louis Bonaparte.”
— Jürgen Habermas

“[Buying Time] reinvigorates the tradition to reflect on the inherent friction between democracy and capitalism in broad historical analyses … Without any doubt, Buying Time developes a fascinating and highly compelling narrative of the delayed crisis of capitalism. [One of the] must reads for everyone interested in the Eurozone crisis and critique of capitalism more broadly—with an academic background or as an interested citizen.”
—Elias Steinhilper and Haris Malamidis, European Political Science

Wolfgang Streeck is the director of the Max Planck Institute for Social Research in Cologne and Professor of Sociology at the University of Cologne. He is an Honorary Fellow of the Society for the Advancement of Socio-Economics and a member of the Berlin Brandenburg Academy of Sciences as well as the Academia Europaea.
Loading...
or
Not Currently Available for Direct Purchase