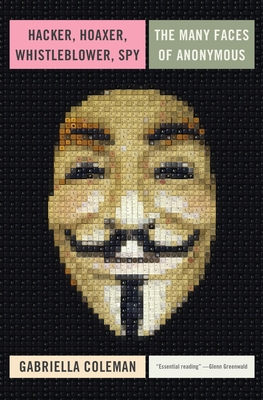 The Many Faces of Anonymous

The ultimate book on the worldwide movement of hackers, pranksters, and activists collectively known as Anonymous—by the writer the Huffington Post says “knows all of Anonymous’ deepest, darkest secrets”

“A work of anthropology that sometimes echoes a John le Carré novel.” —Wired

Half a dozen years ago, anthropologist Gabriella Coleman set out to study the rise of this global phenomenon just as some of its members were turning to political protest and dangerous disruption (before Anonymous shot to fame as a key player in the battles over WikiLeaks, the Arab Spring, and Occupy Wall Street). She ended up becoming so closely connected to Anonymous that the tricky story of her inside–outside status as Anon confidante, interpreter, and erstwhile mouthpiece forms one of the themes of this witty and entirely engrossing book.

The narrative brims with details unearthed from within a notoriously mysterious subculture, whose semi-legendary tricksters—such as Topiary, tflow, Anachaos, and Sabu—emerge as complex, diverse, politically and culturally sophisticated people. Propelled by years of chats and encounters with a multitude of hackers, including imprisoned activist Jeremy Hammond and the double agent who helped put him away, Hector Monsegur, Hacker, Hoaxer, Whistleblower, Spy is filled with insights into the meaning of digital activism and little understood facets of culture in the Internet age, including the history of “trolling,” the ethics and metaphysics of hacking, and the origins and manifold meanings of “the lulz.”

Praise For Hacker, Hoaxer, Whistleblower, Spy: The Many Faces of Anonymous…

“The US government and its allies have spent years castigating, prosecuting, and jailing members of Anonymous, with the director of the NSA going so far as to warn ominously of the potential of an Anonymous-led power blackout. But Gabriella Coleman’s fascinating history of Anonymous makes clear that almost all of the hacktivism attributed to this global collective has been devoted to exposing wrongdoing, not wreaking destruction, even as she also carefully shows that Anonymous is not a shadowy organization but a loosely knit collection of activists all over the globe, fighting for government and corporate transparency. The NSA’s treatment of Anonymous is disturbing and extreme, and Anonymous’s surprising activist turn is heartening. Essential reading.”
—Glenn Greenwald

“Coleman takes us on a thrilling journey into the uncharted landscape of hackers, trolls, and Anonymous activists who live among us. It’s both a perfect initiation for all those n00bs out there still wondering what a ‘n00b’ is, as well as an important discourse on the role of anarchy online … A hilarious, important piece of hidden history that is very hard to put down.”
—Douglas Rushkoff, author of Present Shock

“A long-awaited and compelling study of the activist collective … Anyone interested in Anonymous, or the shape of protest in the age of the internet, will find abundant new details and smart insight here.”
—Jamie Bartlett, Guardian

“Insightful and awe-inspiring. This book will shake up assumptions at the core of academia, industry, law enforcement, and the media. It’s a must read!”
—danah boyd, author of It’s Complicated: The Social Lives of Networked Teens

“Penetrates the chaotic, ad hoc, contradictory world of the Anons … What Gabriella Coleman has done, with a fine eye and a storyteller’s talent, is to untangle the hairball just enough to get a sense of its topology, its power and its limits—if not its direction. That is anyone’s guess.”
—Cory Doctorow, The Spectator

“Coleman charts her own conceptual course, breaking with the standard narratives, particularly the click-baity cautionary tales about the dangers of Anonymous. Her book offers its share of warnings, but ones more nuanced, compelling, and empathetic than the typical hand-wringing about online mobs and the conundrum of virtual vigilante justice. Coleman is no cheerleader … But she also doesn’t wag her finger from some imagined high ground.”
—Astra Taylor, Bookforum

“An engrossing, accessible, and intelligent study illuminating the ambiguities of Anonymous and its implications for the future of online political activism.”
—Times Literary Supplement

“Anyone hoping to understand this mostly hidden world will find [Coleman’s] book crucial and even prescient.”
—Boston Globe

“[Coleman’s] painstaking research takes the reader right into the heart of the group … Without doubt one of the biggest authorities in the world on the subject of Anonymous.”
—Independent

“This is the ultimate piece on Anonymous. It’s a notoriously difficult subject to write about, but Gabriella Coleman has succeeded where others have failed, and the result is a masterpiece that is informative, interesting, and funny. A fine example of what an investigative book should be.”
—Mustafa Al-Bassam, alias “tflow,” former member of LulzSec

“Exhaustively researched and devilishly readable … If there could be a definitive writer on a movement like Anonymous, Coleman would be it.”
—Molly Crabapple, artist and author of Drawing Blood

“[An] eye-opening ethnography … This all-access pass into the dark and wild corners of the Internet is timely, informative, and also frightening.”
—Publishers Weekly

“An intensive, potent profile of contemporary digital activism at its most unsettling—and most effective.”
—Kirkus Reviews (“Best Books of 2014”)

“What began as an academic project became a personal one for Coleman, which dominated her life. The result, for the reader, is a story which is in equal parts informative and enthralling.”
—David Gilbert, International Business Times

“Gabriella Coleman’s detailed ethnographic and historical account of the internet collective Anonymous—ranging from its origin on random 4Chan bulletin boards to its role in the Occupy movement and beyond—will prove to be a watershed book in the study of online activism.”
—Bernard Doherty, Nova Religio

Gabriella Coleman holds the Wolfe Chair in Scientific and Technological Literacy at McGill University. Trained as a cultural anthropologist, she researches, writes, and teaches on computer hackers and digital activism. She is the author of Coding Freedom: The Ethics and Aesthetics of Hacking.
Loading...
or
Not Currently Available for Direct Purchase