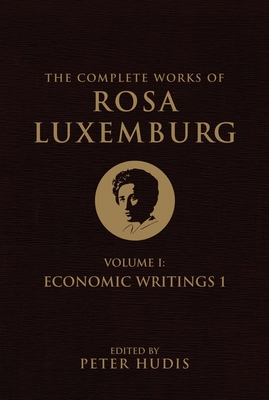 The Complete Works of Rosa Luxemburg, Volume I

This first volume in Rosa Luxemburg’s Complete Works, entitled Economic Writings 1, contains some of Luxemburg’s most important statements on the globalization of capital, wage labor, imperialism, and pre-capitalist economic formations.

In addition to a new translation of her doctoral dissertation, “The Industrial Development of Poland,” Volume I includes the first complete English-language publication of her “Introduction to Political Economy,” which explores (among other issues) the impact of capitalist commodity production and industrialization on noncapitalist social strata in the developing world. Also appearing here are ten recently discovered manuscripts, none of which has ever before been published in English.

Praise For The Complete Works of Rosa Luxemburg, Volume I: Economic Writings 1…

“One cannot read the writings of Rosa Luxemburg, even at this distance, without an acute yet mournful awareness of what Perry Anderson once termed ‘the history of possibility.’” —Christopher Hitchens, Atlantic

“Luxemburg’s criticism of Marxism as dogma and her stress on consciousness exerted an influence on the women’s liberation movement which emerged in the late ’60s and early ’70s.” —Sheila Rowbotham, Guardian

“One of the most emotionally intelligent socialists in modern history, a radical of luminous dimension whose intellect is informed by sensibility, and whose largeness of spirit places her in the company of the truly impressive.” —Vivian Gornick, Nation

Peter Hudis is a Lecturer at Oakton Community College. He coedited The Letters of Rosa luxemburg; The Rosa Luxemburg Reader; and Raya Dunayevskaya’s Selected Writings on the Dialectic in Hegel and Marx.
Loading...
or support indie stores by buying on
(This book is on backorder)