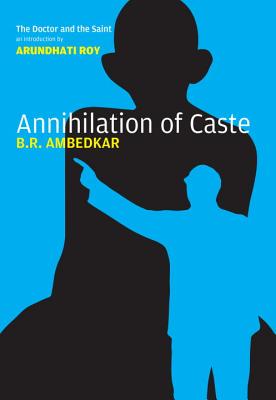 What the "Communist Manifesto "is to the capitalist world, "Annihilation of Caste" is to India. Anand Teltumbde, author of "The Persistence of Caste"
B.R. Ambedkar's "Annihilation of Caste "is one of the most important, yet neglected, works of political writing from India. Written in 1936, it is an audacious denunciation of Hinduism and its caste system. Ambedkar a figure like W.E.B. Du Bois offers a scholarly critique of Hindu scriptures, scriptures that sanction a rigidly hierarchical and iniquitous social system. The world's best-known Hindu, Mahatma Gandhi, responded publicly to the provocation. The hatchet was never buried.
Arundhati Roy introduces this extensively annotated edition of "Annihilation of Caste "in The Doctor and the Saint," "examining the persistence of caste in modern India, and how the conflict between Ambedkar and Gandhi continues to resonate. Roy takes us to the beginning of Gandhi's political career in South Africa, where his views on race, caste and imperialism were shaped. She tracks Ambedkar's emergence as a major political figure in the national movement, and shows how his scholarship and intelligence illuminated a political struggle beset by sectarianism and obscurantism. Roy breathes new life into Ambedkar's anti-caste utopia, and says that without a Dalit revolution, India will continue to be hobbled by systemic inequality.

Bhimrao Ramji Ambedkar was born in 1891 into an Untouchable family of modest means. One of India s most radical thinkers, he transformed the social and political landscape in the struggle against British colonialism. He was a prolific writer who oversaw the drafting of the Indian Constitution and served as India s first Law Minister. In 1935, he publicly declared that though he was born a Hindu, he would not die as one. Ambedkar eventually embraced Buddhism, a few months before his death in 1956.

Arundhati Roy is the author of the Booker Prize winning novel "The God of Small Things." Her recent political writings include "Listening to Grasshoppers," "Broken Republic," and "Capitalism: A Ghost Story."

S. Anand is the publisher of Navayana, an independent press in New Delhi. He is the coauthor of "Ambedkar: The Fight for Justice," a graphic biography, and has annotated this edition of "Annihilation of Caste.""
or
Not Currently Available for Direct Purchase
Copyright © 2020 American Booksellers Association