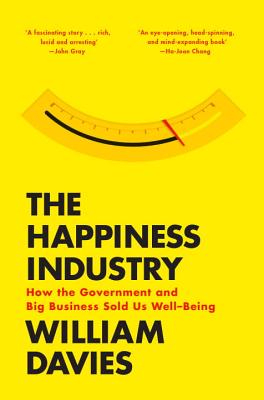 How the Government and Big Business Sold us Well-Being

“A brilliant, and sometimes eerie, dissection” of ‘the science of happiness’ and the modern-day commercialization of our most private emotions (Vice)

In winter 2014, a Tibetan monk lectured the world leaders gathered at Davos on the importance of Happiness. The recent DSM-5, the manual of all diagnosable mental illnesses, for the first time included shyness and grief as treatable diseases. Happiness has become the biggest idea of our age, a new religion dedicated to well-being.

Here, political economist William Davies shows how this philosophy, first pronounced by Jeremy Bentham in the 1780s, has dominated the political debates that have delivered neoliberalism. From a history of business strategies of how to get the best out of employees, to the increased level of surveillance measuring every aspect of our lives; from why experts prefer to measure the chemical in the brain than ask you how you are feeling, to why Freakonomics tells us less about the way people behave than expected, The Happiness Industry is an essential guide to the marketization of modern life. Davies shows that the science of happiness is less a science than an extension of hyper-capitalism.

Praise For The Happiness Industry: How the Government and Big Business Sold us Well-Being…

“Deeply researched and pithily argued, Davies’s work is a welcome corrective to the glut of semi-scientific happiness books that have become so popular in business and management circles, and which rarely, if ever, acknowledge the larger ideological goals of workplace well-being.”
—New York Magazine

“Davies’s concern is to show that by making us more resilient and more productive, the happiness industry tricks us into settling for too little.”
—Katrina Forrester, London Review of Books

“Davies, explaining the evolution of the science of happiness from the French Revolution to the present, argues it essentially serves the interests of the powerful elite. This challenging book will appeal to academics and students of various disciplines.”
—Booklist

“William Davies argues that our happiness fixation may have more to do with the interests of corporations and governments than personal fulfillment.”
—Fortune

“A brilliant, and sometimes eerie, dissection of our times.”
—Vice

“A thought-provoking and daring intervention into the crowded field of neoliberal political economy … Its bold theses and elegant historical foundation provides political economists with much new material to consider.”
—Erasmus Journal for Philosophy and Economics

“How ‘managing our happiness’ is becoming an increasingly lucrative and insidious industry.”
—New Humanist

“An interesting contribution to the growing genre of happiness studies.”
—THE

“This is a brilliant and lucidly written indictment of the ideology of happiness and its accompanying horrors of mindfulness and well-being. Davies convincingly shows how the happiness industry is the new front line of capitalism, which has succeeded in exposing the inner recesses of the self to techniques of measurement, surveillance and control.”
—Simon Critchley, author of The Faith of the Faithless

“William Davies reveals the tricks that corporates use to try to keep us happy while treating us as losers. Informed, revealing, scary and hopeful, The Happiness Industry connects economics and management science to psychology and psychiatry to explain why so much feels (and is) so wrong.”
—Danny Dorling, author of Inequality and the 1%

“When did happiness itself become a liability? When the market figured out that making us content is the first stage in manufacturing our consent. In this accessible, fact-filled history of measured happiness, William Davies shows us how metrics of well-being were systematically disconnected from meaning and community, and in the process transformed from the very core of human power into an access panel to our desires and behavior. I can’t listen to that damned ‘Happy’ song anymore without thinking about whom my supposed happiness really serves, and what they’re willing to do to make sure I stay that way.”
—Douglas Rushkoff, author of Present Shock: When Everything Happens Now

“In a heady mixture of psychology, economics, sociology, and philosophy, this book reveals the misguided nature of the currently popular intellectual project to make people happier and improve society through ‘scientific’ understanding—and manipulation—of human beings … An eye-opening, head-spinning, and mind-expanding book.”
—Ha-Joon Chang, University of Cambridge, author of 23 Things They Don’t Tell You about Capitalism

“Davies has added a valuable critique, and a fantastic read, to the current literature on happiness.”
—Jared Smith, Marx & Philosophy Review of Books

“Although the book draws on scientific knowledge, it remains a popular book aimed at an interested general population and should be read as such … It is a fascinating exploration and well-grounded argument of how and why people are cashing in on the ‘happiness industry.’”
—Tracey Platt and Willibald Ruch, Humorous Times

William Davies is the author of The Limits of Neoliberalism. His writing has appeared in New Left Review, Prospect, the Financial Times, and Open Democracy. His website www.potlatch.co.uk was featured in the New York Times. He teaches at Goldsmiths, London.
Loading...
or
Not Currently Available for Direct Purchase