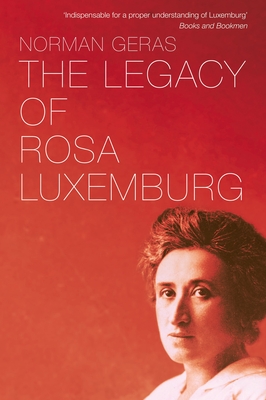 An important contribution to our understanding of twentieth-century Marxism

During the first decades of the twentieth century, Rosa Luxemburg was the leader of the workers’ movement in Poland and Germany. She made a remarkable contribution to socialist theory and practice, yet her legacy remains in dispute. In this book Norman Geras interrogates and refutes the myths that have developed around her work. She was an opponent of socialist participation in the First World War and, as Geras shows, her views on socialist strategy in Russia were closer to Lenin’s than any other leader’s. Geras explores the development of Luxemburg’s critique in the period following the war and demonstrates how her thought is distinct from the social democratic or anarchist theories into which it is often subsumed. Geras brings new light to bear on one of the most misrepresented figures in radical history, illustrating her inspiring lack of complacency and her commitment to questioning those in authority on both the Right and the Left.

“This is a useful and thoughtful book, in which the power and originality of Rosa Luxemburg’s thinking emerges.”
—E.H. Carr, Times Literary Supplement

“Geras’s book is indispensable for a proper understanding of Luxemburg.”
—Books and Bookmen

Norman Geras was born in 1943 in what is now Zimbabwe, and came to England in 1962 to study at Oxford. He started teaching at the University of Manchester where he would become a Professor in the Department of Government. He was an important part of the New Left movement and an editorial board member and contributor at New Left Review. He contributed to Marxist political theory throughout his life, most prominently in his books Marx and Human Nature: Refutation of a Legend and Literature of Revolution: Essays on Marxism. On his retirement he started a blog, normblog, and remained a prolific voice on politics until his death in 2013.
Loading...
or
Not Currently Available for Direct Purchase