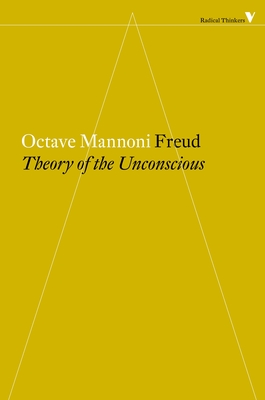 The Theory of the Unconscious (Radical Thinkers)

Octave Mannoni worked in France, Madagascar and Africa throughout the twentieth century to extend Lacanian psychoanalytical methods into the field of ethnology. He is best known for his research into the psychic repercussions of colonialism’s constitutive elements: the domination of a mass by a minority, economic exploitation, paternalism and racialism.

Freud: The Theory of the Unconscious is a well-crafted and concise introduction to the life, work and theories of psychoanalysis’ founder. Mannoni draws on the perspective provided by his Lacanian work on colonialism to provide a unique intellectual biography of Freud, tracing the genesis and development of various key psychoanalytical concepts. Mannoni provides a critical account of the various shortcomings in Freud’s work, as well as its strengths.

Praise For Freud: The Theory of the Unconscious (Radical Thinkers)…

Octave Mannoni (1898–1989) was a leading thinker in the French psychoanalytical tradition inspired by Jacques Lacan. After travelling to Africa and residing for more than twenty years in Madagascar, where he held various positions while working as an ethnologist, Mannoni returned to France to develop his influential work on colonization.
Loading...
or
Not Currently Available for Direct Purchase