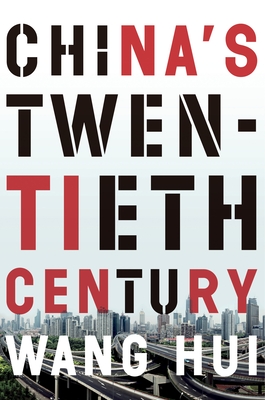 Revolution, Retreat and the Road to Equality

What must China do to become truly democratic and equitable? This question animates most progressive debates about this potential superpower, and in China’s Twentieth Century the country’s leading critic, Wang Hui, turns to the past for an answer. Beginning with the birth of modern politics in the 1911 revolution, Wang tracks the initial flourishing of political life, its blossoming in the radical sixties, and its decline in China’s more recent liberalization, to arrive at the crossroads of the present day. Examining the emergence of new class divisions between ethnic groups in the context of Tibet and Xinjiang, alongside the resurgence of neoliberalism through the lens of the Chongqing Incident, Wang Hui argues for a revival of social democracy as the only just path for China’s future.

Wang Hui is a Professor in the Department of Chinese Language and Literature at Tsinghua University in Beijing, where he currently lives. He studied at Yangzhou University, Nanjing University, and the Chinese Academy of Social Sciences. He has also been a visiting professor at NYU and other universities in the US. In 1989, he participated in the Tiananmen Square protests and was subsequently sent to a poor inland province for compulsory “reeducation” as punishment for his participation. He developed a leftist critique of government policy and came to be one of the leading proponents of the Chinese New Left in the 1990s, though Wang Hui did not choose this term. Wang was named as one of the top 100 public intellectuals in the world in 2008 by Foreign Policy. He is the author of The End of the Revolution, China’s New Order, The Politics of Imagining Asia, and China’s Twentieth Century.

Praise For China's Twentieth Century: Revolution, Retreat and the Road to Equality…

“Mobilizing lessons from a non-Western context to unpack the contested meanings of socialism and democracy … Wang reminds us that China’s socialist legacy, much like its long-standing participation in anti-imperialist struggles in the Global South, is not to be forgotten. Instead, it should be rigorously analyzed and critically re-appropriated as a means to reshape the contours of global justice.”
—Fan Yang, Socialism and Democracy

“Wang’s intervention into both Chinese- and English-language histories of China is both politically charged and theoretically rich, exploring the possibilities for equality and justice that were created and then suppressed during this period in China’s recent past.”
—Zach Smith, Education About Asia

“A central figure among a group of writers and academics known collectively as the New Left.”
—New York Times Magazine