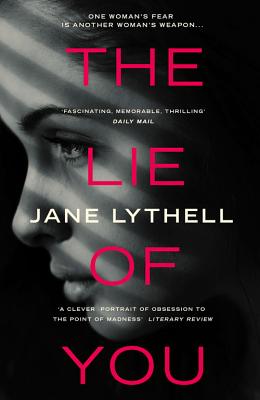 The Lie of You

Can you hide your deepest fear? A woman sets out to destroy her female boss in this chilling psychological thriller. "When I look back on my relationship with Kathy I marvel at how naive she was, how little she knew. But then, she always thought she had everything: the job; the baby; the friends; and him. She thought she was safe. She thought that nothing could touch her perfect world. She should never have trusted me."  To the outside world, Kathy is the very picture of a happy and fulfilled modern woman. She has a beautiful baby boy, a clever, handsome husband, and a glamorous, high-powered job. But not everybody is fooled. Her employee, Heja, knows the truth: the cracks in Kathy's marriage, her self-doubt, her fear of failure at work. Heja is perfectly placed to destroy Kathy's life. And if she succeeds, she can claim the one thing she wants most. One woman's fear is another woman's weapon, in this cleverly constructed debut novel focusing on jealousy, rivalry, and deceit.

Praise For The Lie of You…

"Pumps up suspense like Gillian Flynn's Gone Girl . . . delivered in a sharp, pragmatic style that is gripping and readable, but behind the adventure the plot hints at bigger, more complex questions about our society."  —Scotsman

"Great writing and interesting female characters make this an entertaining thriller about rivalry, will and desperation."  —Diva

"The plotting is unpredictable as well as plausible and character driven—not an easy trick to pull off."  —Independent

Jane Lythell worked as a television producer and commissioning editor before becoming deputy director of the British Film Institute and chief executive of BAFTA.
Loading...
or
Not Currently Available for Direct Purchase