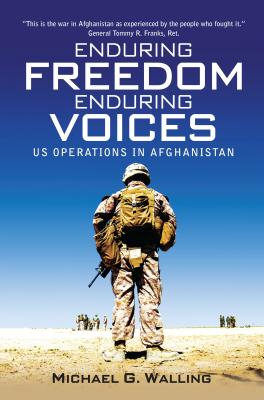 US Operations in Afghanistan (General Military)

The war in Afghanistan has become one of the most complex, challenging operations in the history of the US military. Using first-hand accounts of the men and women who fought in Operation Enduring Freedom, this book presents an intensely personal history of the war in Afghanistan, revealing the determination, heroism, sacrifice, and strength of spirit that came to form the fabric of the conflict.

Enduring Freedom, Enduring Voices places the first-hand accounts of serving men and women into the context of the military operations. Drawing on gripping oral histories, from theater commanders, Special Forces troops, reconstruction teams, and everyday soldiers, Michael G. Walling analyzes operations as they were experienced by individuals, from those immediately following 9/11 through to those in 2014 as US troops prepared to withdraw. Written following a research trip to the region, in which the author spent considerable time embedded with the US forces, Walling's unique and intensely personal history offers a timely insight into the conflict as the majority of NATO forces are withdrawn – the final chapter in the story of US military operations in Afghanistan.

He also charts the evolution of US military structure as it was forced to adapt to cope with the non-conventional, but nonetheless deadly threats of asymmetric warfare, as well as detailing covert ops, infrastructure rebuilding, and the training of Afghan forces.

Resonating across gender, age, nationality, and ethnicity, this book is not just a document of US fortunes in a far-flung conflict. It is a  tribute to the determination, heroism, sacrifice, and the strength of the human spirit.

“Michael Walling has honored the American men and women who served in Operation Enduring Freedom by helping them tell their own stories. This is the war in Afghanistan as experienced by the people who fought it.” —Tommy R. Franks, General, Ret.

Michael G. Walling is author of several books, including Bloodstained Sea, the 2005 Samuel Eliot Morison Award for Naval Literature. An internationally recognized World War II expert, Walling is a contributing author to the U.S. Naval Institute's Naval History Magazine and has appeared on The History Channel and PBS as an aviation and naval expert. After graduating from Montclair State College with a BA in Biology, Walling served in the U.S. Coast Guard for six years as a commissioned officer and a senior petty officer. He has spent more than 45 years collecting stories from veterans from World War II, Korea, Vietnam, and Iraq, as well as those of pilots, merchant seamen, and civilian personnel with NATO and EUFOR in the Balkans. His research has included visits to London, Sarajevo, Baska Voda, Croatia, Halifax, Nova Scotia, St. John's, Newfoundland, and New Orleans. The author lives in Hudson, Massachusetts.
Loading...
or
Not Currently Available for Direct Purchase