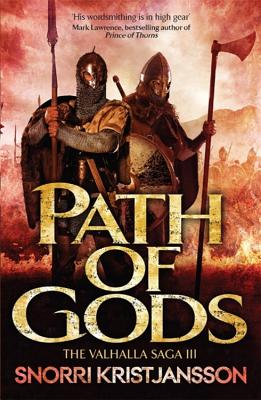 The epic conclusion to The Valhalla Saga, perfect for fans of Vikings and The Last Kingdom.

Reunited, Audun and Ulfar have a new sense of purpose: to ensure that the North remains in the hands of those who hold with the old gods. To do this, they must defeat the people who seek to destroy all they have ever known with the new White Christ. But these are powerful enemies and if they have any chance of victory, they must find equally powerful allies.

In Trondheim, King Olav, self-appointed champion of the White Christ, finds that keeping the peace is a much harder test of his faith than winning the war. With his garrison halved and local chieftains at his table who wish him nothing but ill, the king must decide how and where to spread the word of his god.

And in the North, touched by the trickster god, something old, malevolent and very, very angry stirs . . .


Praise For Path of Gods: The Valhalla Saga Book III…

Path of Gods provides a worthy final stop filled with heart-warming revels and blood curdling showdowns . . . If you haven't done it by now, do yourself a favour and get the entire trilogy - it's truly unique—Upcoming4me

A frenetically fast fantasy novel ... which due to its originality easily rises above the crowd—Upcoming4me on Blood Will Follow

Fans of Gemmell will devour Kristjansson's books—Spec on Spec Fiction

It's fun, and this book is a mix of fiction and mythology. A great mix that works—Books For Life

The finisher the series deserved . . . The Valhalla Saga has definitely marked Snorri Kristjansson as an author to watch—The Book Plank

Very much in the vein of David Gemmell, it's a Viking fantasy with a style not unlike Joe Abercrombie. The prose is quick, accomplished and action-packed. The actual action sequences here are literally breath-taking . . . Swords of Good Men would make a brilliant action film—Wilders Book Review

as awesome as the other two, but if possible, even more epic—Book Geek Says

Snorri Kristjansson was born in Iceland and is a writer and a teacher, as well as a stand-up comedian, actor and musician. He currently lives in Edinburgh with his artist wife. The Valhalla Saga, his Viking fantasy series, and The Helga Finnsdottir books, his Viking historical/crime series, are all published by Jo Fletcher Books.
Loading...
or
Not Currently Available for Direct Purchase