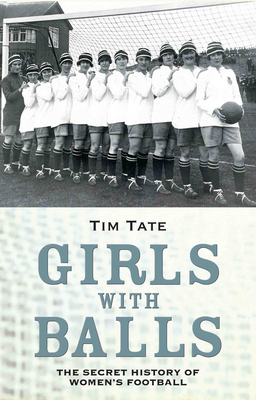 Boxing Day 1920, and 53,000 men, women and children pack inside Goodison Park. The extraordinary crowds have come to watch two local rivals play a match for charity. But this is no ordinary charity fixture. Eleven of the players are international celebrities and their team is the biggest draw in British—and world—football. Yet they are all full-time factory workers—and they are women. They are the ladies of Dick Kerr electrical works. And the male football establishment is terrified by them. With the men away fighting from 1914–1918, most of the workers in the factories of northern England were women. And many factories had a ladies’ football team. In December 1917, the team from the Dick Kerr factory challenged the ladies of the nearby Arundel Coulthard Foundry to a charity match. It was the first of 828 games for Dick Kerr Ladies as over the decades they scored more than 3,500 goals and raised the equivalent of £1million for an array of charities. By 1920, ladies’ football was a major spectator sport. But away from the cheering terraces the bastions of professional men’s football viewed the mass popularity of women’s soccer with increasing alarm. On December 5, 1921 the Football Association met in London. After a brief debate behind closed doors it unanimously passed an urgent resolution: women’s football was banned from all professional football grounds. Dick Kerr Ladies did not give in, playing their matches on parkland with thousands of spectators turning up to watch. But constant pressure from the FA meant that one by one, teams began to fold. It would take until 1971 for the FA to lift its ban. Today, women’s football has once again claimed a place in the global game. But it came too late for the pioneers of the sport: Preston Ladies—née Dick Kerr Ladies—played their last match in 1969. Girls With Balls tells the extraordinary story of the time when women ruled the football world. With recollections from the last remaining member of the team from Dick Kerr’s glory years and a treasure trove of contemporary photographs, this is the missing chapter in the history of football, its last great secret. It is a story of men with power, wealth and a fiefdom to protect. But above all, it is a story of girls with balls.

Tim Tate is an award-winning documentary film maker and an author. He has produced and directed films for BBC, ITV, Channel 4, Channel 5, Al Jazeera International, and the Discovery Channel. His work has won awards from Amnesty International, the Royal Television Society, UNESCO, The New York Festivals, the Association for International Broadcasting, and the US Cable Academy. He is the author of eight previous nonfiction books, including Slave Girl. A passionate rugby spectator and coach, uncovering the secret history of women's football has forced him to reevaluate a sport he always believed to played with the wrong-shaped ball.
Loading...
or
Not Currently Available for Direct Purchase