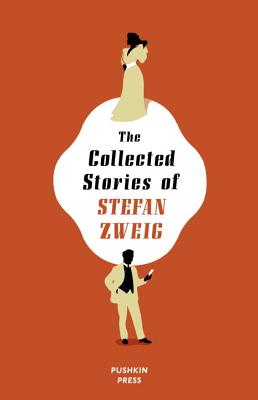 The Collected Stories of Stefan Zweig

In this magnificent collection of Stefan Zweig's short stories the very best and worst of human nature are captured with sharp observation, understanding and vivid empathy. Ranging from love and death to faith restored and hope regained, these stories present a master at work, at the top of his form. Perfectly paced and brimming with passion, these twenty-two tales from a master storyteller of the Twentieth Century are translated by the award-winning Anthea Bell.

Praise For The Collected Stories of Stefan Zweig…

"a comparison between Bell’s English rendering and the original German reveals that she rarely deviates from Zweig’s language—and when she does, it is in pursuit of the aesthetic and psychological spirit of the original over artless mechanical accuracy. . . Zweig is at once the literary heir of Chekhov, Conrad, and Maupassant, with something of Schopenhauer’s observational meditations on psychology thrown in. The Collected Stories of Stefan Zweig is a major book of cultural and historical importance, and Pushkin Press has done the literary world a service by releasing it in such an attractive volume." — Okla Elliott, The Harvard Review Online

“What did Zweig have that brought him the fanatical devotion of millions of readers, the admiration of Herman Hesse, the invitation to give the eulogy at the funeral of Sigmund Freud? To learn that, we would have to have a biography that illuminated all aspects of his work, that read all of his books, and that challenged, rather than accepted, the apparent modesty of his statements about his life and work.” – Benjamin Moser, Bookforum

“Amok, a 1922 novella (recently reissued in Pushkin Press’s Collected Stories, translated by Anthea Bell). . . is quintessentially Zweig, masterful in generating suspense, operatically predictable (the woman always dies in Act Four, so the man has a story to tell in Act Five), and drenched in the implicit mores of the day, which Zweig tweaked in his modest fashion by depicting a clean abortion as a better option than a coat hanger. . . . Amok is a compelling story: for its meticulous portrait of the doctor’s emotional process, its compression, and the almost identically sharp observations of gestures, movements, the charged silences in a conversation.” – Gary Indiana, Bookforum

"For far too long, our links with Zweig, all too readily consigned to the dustbin of literary history, have been broken. Pushkin Press’s phenomenal, heartbreaking collection is a reminder that it’s time to forge them again." - Tara Burton, Los Angeles Review of Books

"With each story there is a plea for help, a flicker of hope and an ultimate betrayal." - The New York Daily News

"And thanks to Anthea Bell, who has brought us the beautiful translations of W. G. Sebald, we now have many of the books that made Zweig the Updike of his time, from the novel Beware of Pity to his memoir and now The Collected Stories, a fat, orange volume that brings together several dozen of the short works upon which Zweig’s reputation rested in his heyday." - New York Observer

"The Collected Stories of Stephan Zweig [is] 720 pages of pure surprise and I’m grateful to the Pushkin Press for bringing it out and helping me to figure out why I’ve been hearing that name for so many years, and finally delving in. You won’t regret it you do too." - Eric Alterman, The Nation

"One of the joys of recent years is the translation into English of Stefan Zweig's stories. They have an astringency of outlook and a mastery of scale that I find enormously enjoyable." - Edmund de Waal, author of The Hare with the Amber Eyes

"[T]he time has come for Zweig to enter into America’s literary conversation." - Flavorwire

"One hardly knows where to begin in praising Zweig's work." - Ali Smith

"Zweig belongs with those masters of the novella-Maupassant, Turgenev, Chekhov." -Paul Bailey

"One of the masters of the short story." - Nicholas Lezard, Guardian

"The stories are as page-turning as they are subtle... Compelling." - Guardian

"Touching and delightful. Those adjectives are not meant as faint praise. Zweig may be especially appealing now because rather than being a progenitor of big ideas, he was a serious entertainer, and an ardent and careful observer of habits, foibles, passions and mistakes." — A.O. Scott, The New York Times

'Stefan Zweig... was a talented writer and ultimately another tragic victim of wartime despair. This rich collection... confirms how good he could be." - Eileen Battersby, Irish Times

Stefan Zweig was born in 1881 in Vienna, into a wealthy Austrian-Jewish family. He studied in Berlin and Vienna and was first known as a poet and translator, then as a biographer. Between the wars, Zweig was an international bestseller with a string of hugely popular novellas including Letter from an Unknown Woman, Amok and Fear. In 1934, with the rise of Nazism, he left Austria, and lived in London, Bath and New York—a period during which he produced his most celebrated works: his only novel, Beware of Pity, and his memoir, The World of Yesterday. He eventually settled in Brazil, where in 1942 he and his wife were found dead in an apparent double suicide. Much of his work is available from Pushkin Press.
Loading...
or
Not Currently Available for Direct Purchase