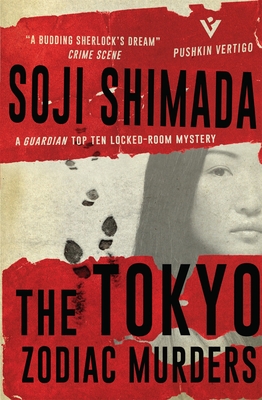 Astrologer, fortuneteller, and self-styled detective Kiyoshi Mitarai must solve a macabre murder mystery that has baffled Japan for 40 years—in just one week. With the help of his freelance illustrator friend, Kiyoshi sets out to answer the questions that have haunted the country ever since: Who murdered the artist Umezawa, raped and killed his daughter, and then chopped up the bodies of six others to create Azoth, ‘the perfect woman’?

With maps, charts, and other illustrations, this story of magic and illusion—pieced together like a great stage tragedy—challenges the reader to unravel the mystery before the final curtain falls.

‘If you like your crime stories to be bloody and bizarre, then this one may be for you. The winner of several major awards... the solution is one of the most original that I've ever read.’ — Daily Mail

Born in 1948 in Hiroshima prefecture, Soji Shimada has been dubbed the 'God of Mystery' by international audiences. A novelist, essayist and short-story writer, he made his literary debut in 1981 with The Tokyo Zodiac Murders, which was shortlisted for the Edogawa Rampo Prize. Blending classical detective fiction with grisly violence and elements of the occult, he has gone on to publish several highly acclaimed series of mystery fiction. He is the author of 100+ works in total, including Murder in the Crooked House. In 2009 Shimada received the prestigious Japan Mystery Literature Award in recognition of his life's work.
Loading...
or support indie stores by buying on
(This book is on backorder)