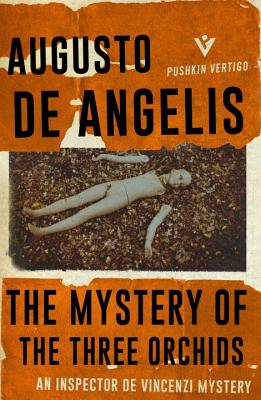 The Mystery of the Three Orchids (Pushkin Vertigo #8) (Paperback)

Who could have imagined that, among the wooden mannequins of the O'Brian fashion house, a man's body would lie? After The Hotel of the Three Roses, here are three more flowers for Inspector De Vincenzi: orchids, each one announcing a grisly murder. This is a tour de force murder mystery from the father of the Italian crime novel.

Augusto De Angelis (1888-1944) was an Italian novelist and journalist, most famous for his series of detective novels featuring Commissario Carlo De Vincenzi. His cultured protagonist was enormously popular in Italy, but the Fascist government of the time considered him an enemy, and during the Second World War he was imprisoned by the authorities. Shortly after his release he was beaten up by a Fascist activist and died from his injuries.

Praise For The Mystery of the Three Orchids (Pushkin Vertigo #8)…

'As humane as Maigret, as romantic as Marlowe, as intellectual as Philo Vance, yet stubbornly Italian' Oreste del Buono

'De Vincenzi, is an investigator who doesn't stop at the material evidence, but digs with uncommon passion in the psyche of his characters, and the atmosphere in which they live and operate... a rare delight' Corriere Della Sera
or
Not Currently Available for Direct Purchase
Copyright © 2020 American Booksellers Association