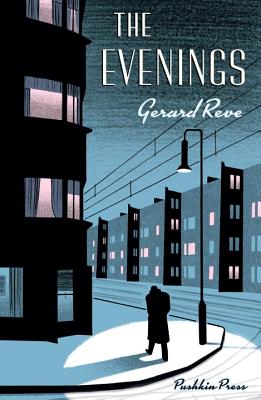 THE FIRST ENGLISH TRANSLATION OF A POSTWAR MASTERPIECE

'I work in an office. I take cards out of a file. Once I have taken them out, I put them back in again. That is it.'

Twenty-three-year-old Frits - office worker, daydreamer, teller of inappropriate jokes - finds life absurd and inexplicable. He lives with his parents, who drive him mad. He has terrible, disturbing dreams of death and destruction. Sometimes he talks to a toy rabbit.

This is the story of ten evenings in Frits's life at the end of December, as he drinks, smokes, sees friends, aimlessly wanders the gloomy city street and tries to make sense of the minutes, hours and days that stretch before him.

Darkly funny and mesmerising, The Evenings takes the tiny, quotidian triumphs and heartbreaks of our everyday lives and turns them into a work of brilliant wit and profound beauty.

Praise For The Evenings: A Winter's Tale…

"Exceptional... a crisp and readable translation by Sam Garrett." — The Wall Street Journal

"Fascinating, hilarious, and page-turning. The publication of this novel marks the exciting introduction of a wonderful writer to an Anglophone audience." — Publishers Weekly

"Reviewers have compared it favorably to J .D. Salinger’s The Catcher in the Rye, Albert Camus’s The Stranger and Karl Ove Knausgaard’s My Struggle. In The Irish Times, Eileen Battersby called it 'one of the finest studies of youthful malaise ever written,' and in The Guardian, Tim Parks described it as 'not only a masterpiece but a cornerstone manqué of modern European literature.'  The Society of Dutch Literature ranked it as the country’s best 20th-century novel and its third-best of all time." — The New York Times

"Sam Garrett’s precise and convincing translations ... capture the consistently anxious, suggestive, and haunting tone that runs through The Evenings like a live wire—one that, after seventy years, is still electrifying. The narrators of The Fall of the Boslowits Family and Werther Nieland, too, are persuasively rendered in the matter-of-fact and dreamlike tones of the originals." — Philip Huff, New York Review of Books

"Diabolically funny... From the deep midnight of shattered Europe, Reve crafted not only an existential masterwork worthy to stand with Beckett or Albert Camus but an oblique historical testament." — The Economist

"A novel as funny as it is painful . . . A little masterpiece — a provocative reminder that life goes on even in the bleakest of circumstances." — Los Angeles Review of Books

"In this first English translation of a Dutch classic . . . The author’s dry wit and ability to find humor and beauty in the banality of daily life are impressive."— Booklist

“Not only a masterpiece but a cornerstone manque of modern European literature… what can I say, in a world of hype, that will put this book where it belongs, in readers’ hands and minds?... Reve’s sparkling collage of acute observation, droll internal monologue and pitch-perfect dialogue keeps the reader breathless right through to the grand finale...huge respect to Pushkin Press.” — Tim Parks, The Guardian

"Darkly funny and mesmerizing, The Evenings takes the tiny quotidian triumphs and heartbreaks of our everyday lives and turns them into a work of brilliant wit and profound beauty… an extraordinary and highly recommended addition to both community and academic library collections’." — Midwest Book Review

"a neurotic, darkly humorous and cynical treatise on youth in the Netherlands after World War II. . . the book is innovative in its use of language. Reve successfully evokes a strong sense of psychological unrest in the mind of reader." — Out and About Nashville

"It’s a testament to Reve’s writing and imagination that the question of Frits will haunt the reader long after they’re finished." — Pop Matters

"A classic of dry, dark humour… it captures a very specific flavour of ennui." — Herald

"I warmly recommend Gerard Reve’s hilariously gloomy The Evenings… I see it as a Dutch version of Kafka’s Metamorphosis." — Observer

"A Meursault-in-waiting, a blank Holden Caulfield, a precursor to the kid in Iain Bank’s The Wasp Factory. Very good." — Evening Standard

"As a study of aimlessness in postwar Europe it is difficult, perhaps impossible to surpass." — Irish Times

"This much lauded book, finally available in English, [is] the perfect January read." — The Spectator

"The novel is dark, funny, unsettling and lingers vividly in the mind. Hats off to Pushkin Press and the outstanding translator, Sam Garrett, for making this odd, orphaned masterpiece available at last to an English-speaking readership." — Times Literary Supplement

"The Evenings is packed with the minutiae of life: luckily, the minutiae are fascinating…Reve isn't the kind of novelist to give you a straightforward answer but the journey is quite a ride." — The Times

“Reve’s keen eye for absurdity manages to cast the mundane in a new, albeit macabre, light.” — Financial Times

"This 1947 Dutch novel, considered the Netherlands' greatest in the twentieth century and now published in English for the first time...is a savage novel, full of strange, cold laughter." — The Daily Mail

"[A] dark masterpiece... a powerful story." — The Observer

"I was also pleased to see Gerard Reve’s funny, poignant debut novel, The Evenings, available in English … It’s like BS Johnson and Kafka wandering the crepuscular streets of of 1940s Amsterdam together – in a good way." — Alex Preston, The Observer Best Fiction of 2016 round up

"Batavophile bookworms can rejoice now that possibly the greatest Amsterdam novel is now available in English… for a testament to ennui, it’s strangely gripping." —A-Mag (Amsterdam)

"With the first English translation of 1947 Dutch masterpiece The Evenings, by the out-of-time, out-of-step gay Catholic convert Gerard Reve, [Pushin Press] makes perhaps its most crucial contribution yet to bringing quietened, radical non-English voices into the open. Reve’s debut doesn’t have the mainstream-baiting sensationalism of his later, sex and religion-focused, work. But it’s debatable whether he ever wrote anything better.
Trying to sum up the rare quality of this novel in a few hundred words is akin to tossing off a pithy one-liner on Karl Ove Knausgård’s six-volume opus My Struggle. Comparisons to that chronicle of domestic minutiae are actually rather neat; much of The Evenings’ enticing devilment is in its mesmerising detail." — The Big Issue

"A masterwork of comic pathos...It should be acknowledged as one of the finest studies of youthful malaise ever written...In all fairness to Salinger, The Evenings is so much better...For a narrative so funny, it is also profoundly moving.'" — Eileen Battersby, The Irish Times

"This deft translation by Sam Garrett offers English readers the exploits of the cynical and awkward 23-year-old Frits van Egters as he wends his way through the last 10 days of 1946 in Amsterdam. . .  In a strangely compelling way the gloom (and eventual hope) of this nearly plotless novel is its strongest quality. How does one find meaning in life when death permeates every dream? Seventy years later, the English-speaking world is gifted with a glimpse into that time. And we sigh. It is nearly as relevant now." — Winnipeg Free Press

"An edgy, atmospheric and sardonically funny book which was way ahead of its time. Still possessing the power to shock but also to beguile, the novel’s bold stylistic tricks and its hero’s original thoughts and deeds mark it out as a classic in any language... it is now time for a wider audience to discover its weird textures and dark delights." — The National (UAE)

“If The Evenings had appeared in English in the 1950s, it would have become every bit as much a classic as On the Road and The Catcher in the Rye.” — Herman Koch, the Dutch bestselling author of The Dinner


“This book, an important classic in the Netherlands and long, long overdue in English, is as funny as it is peculiar. Reve really deserves more attention in the Anglophone world.”  - Lydia Davis

“Unlike John Williams, Gerard Reve’s work was critically acclaimed and sold exceptionally well during his lifetime. But, just like Stoner, The Evenings is brilliantly written, and has a maximum impact on the reader’s soul.” - Oscar van Gelderen, the Dutch publisher who rediscovered John Williams’ Stoner

Gerard Reve (1923-2006) is considered one of the greatest post-war Dutch authors, and was also the first openly gay writer in the country's history. A complicated and controversial character, Reve is also hugely popular and critically acclaimed- his 1947 debut The Evenings was chosen as one of the nation's 10 favourite books by the readers of a leading Dutch newspaper while the Society of Dutch Literature ranked it as the Netherlands' best novel of all time.
Loading...
or
Not Currently Available for Direct Purchase