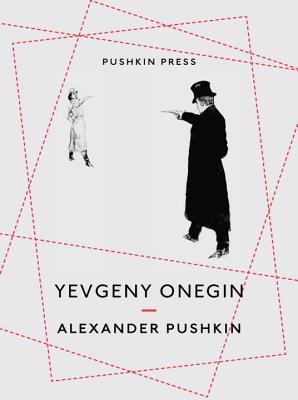 The aristocratic Yevgeny Onegin has come into his inheritance, leaving the glamour of St Petersburg's social life behind to take up residence at his uncle's country estate. Master of the nonchalant bow, and proof of the fact that we shine despite our lack of education, the aristocratic Onegin is the very model of a social butterfly - a fickle dandy, liked by all for his wit and easy ways. When the shy and passionate Tatyana falls in love with him, Onegin condescendingly rejects her, and instead carelessly diverts himself by flirting with her sister, Olga - with terrible consequences.

Yevgeny Onegin is one of the - if not THE - greatest works of all Russian literature, and certainly the foundational text and Pushkin the foundational writer who influence all those who came after (Tolstoy, Dostoevsky, Chekhov, etc). So it's no surprise that this verse novella has drawn so many translators. It's a challenge, too, since verse is always harder to translate than prose. (Vikram Seth, rather than translating Onegin again, updated it to the 1980s in San Franciso in his The Golden Gate). A.D.P. Briggs is arguably the greatest living scholar of Pushkin, certainly in the UK, and as such he's spent a lifetime thinking about how to translate Pushkin. Briggs is an experienced and accomplished translator, not only for Pushkin (Pushkin's The Queen of Spades) but for Penguin Classics (War and Peace, The Resurrection) and others. Briggs has not only been thinking about Pushkin for decades, he's been working on this translation for nearly as long. It's a landmark event in the history of Onegin translations and this edition is accompanied by a thoughtful introduction and translator's note.

Alexander Pushkin was born in 1799. He published his first poem when he was fifteen, and in 1820 his first long poem - Ruslan and Lyudmila - made him famous. His work, including the novel-in-verse Yevgeny Onegin, the poem 'The Bronze Horseman', the play Boris Godunov and the short story The Queen of Spades, has secured his place as one of the greatest writers, in any language, ever to have lived. He died aged just 37, having been wounded in a duel - Pushkin's 29th - by his brother-in-law.

Translated from the Russian by Anthony Briggs (based in the UK), who is one of the world's leading authorities on the work of Pushkin, and an acclaimed translator from the Russian, whose best-known translations include The Queen of Spades and Selected Works published by Pushkin Press, and Tolstoy's War and Peace, The Death of Ivan Ilyich and Resurrection.
or
Buy Here
Copyright © 2020 American Booksellers Association