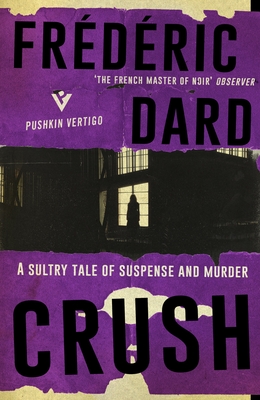 Bored with her mundane factory job, her nagging mother and her alcoholic father-in-law, Louise is captivated by a glamorous American couple who move to her industrial hometown in Northern France. The Roolands' home is an island of colour, good humour and easy living in drab 1950s Léopoldville, and soon Louise is working there as a maid. But once she is under her new employers' roof their model life starts to fall apart - painful secrets from their past emerge, cracks in their relationship appear and a dark obsession begins to grow, which will end in murder...

Frédéric Dard (1921-2000) was one of the best known and loved French crime writers of the twentieth century. Enormously prolific, he wrote more than three hundred thrillers, suspense stories, plays and screenplays, under a variety of noms de plume, throughout his long and illustrious career, which also saw him win the 1957 Grand prix de littérature policière for The Executioner Cries, forthcoming from Pushkin Vertigo.

"With their tight plots, the stories are particularly cinematic, and fi lm-makers are already showing interest. Dard also wrote screenplays and plays. Their revival could be just around the corner." — The Observer

"The wonder is that Frédéric Dard’s singular take on crime noir is not better known in this country. Served by an excellent translator, Dard has much to offer." — Daily Mail

“The cleverness of Dard's Georges Simenon-influenced novella lies in the way that it lulls you into thinking this is just another tale of a teenager's shattered dreams... it is much darker than that.” — The Sunday Times


"No question: for me, he was the greatest." - Philippe Geluck